UK sources have revealed the bloc’s negotiators tabled several new proposals in response to France’s threat to force for a no-deal Brexit unless Boris Johnson makes significant concessions. British officials believe the demands are a “step backwards” and have “destabilised the talks”. Both sides have vowed to work through the night in a bid to overcome the new obstacles.

But sources close to the talks say the dispute has cost them at least 24 hours as time runs out to secure a trade deal.

As senior UK Government source said: “At the eleventh hour, the EU is bringing new elements into the negotiation. A breakthrough is still possible in the next few days but that prospect is receding.”

Pizzas and sandwiches were delivered to the teams led by Lord Frost and the EU’s Michel Barnier tonight as they meet for their the second night running. 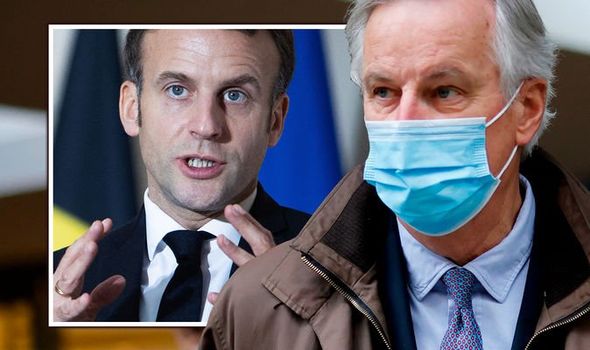 Mr Barnier was forced to harden his position amid fears by hardline EU member states he could offer serious concessions in order to clinch a deal.

Senior Brussels sources claimed the EU’s Brexit chief was on the verge of making compromises in the row over future access to Britain’s coastal waters and state aid rules.

One EU diplomat warned several leaders were queuing up to vote down any unacceptable compromises made by Mr Barnier.

The insider said: “Leaders always have the possibility to reject the outcome and if the mandate is not adhered to they have every right to do so.”

In sign of growing tensions between EU states, Ireland accused hardliners of making a “very dangerous” threat to pursue a no-deal Brexit.

Fuelled by France, some leaders want Mr Barnier to walk away from the negotiations at the end of the week unless Boris Johnson makes significant concessions to get the trade deal over the line.

But Irish foreign minister Simon Coveney warned there is no guarantee Downing Street will return to the negotiating table in the new year.

He claimed a no-deal outcome would leave Dublin in the “cross fire” as Brussels and London’s relationship is plunged into an acrimonious “blame game” over the failed trade talks.

Mr Coveney said: “There’s a good chance we can get a deal across the line in the next few days.

“Closing out a negotiation as complex as this one is never going to be easy.”

He added: “The Irish government will be doing everything we can to try to find a way with the EU and UK teams to get a deal that Ireland can live with.

“This means getting a fair deal for both sides on fisheries, which has proven really, really difficult.”

German Chancellor Angela Merkel was said to be ready to agree to a compromise to cement her legacy before leaving office.

Stefaan De Rynck, a key aide to Mr Barnier, said: “We are at the end of a marathon run. I cannot guarantee that we’ll reach the finishing line with an agreement.

“It’s certainly my feeling both sides are committed to finding a deal. Significant divergences remain. As of today the outcome of the process is uncertain.”

Ahead of the breakdown, the Prime Minister’s official spokesman said: “Intensive talks are continuing in person in London as they have throughout the week, with the negotiating teams continuing to work hard to resolve the differences that remain.

“Our focus remains, and will continue to be, on trying to secure a free-trade agreement, as it has throughout the negotiations.”