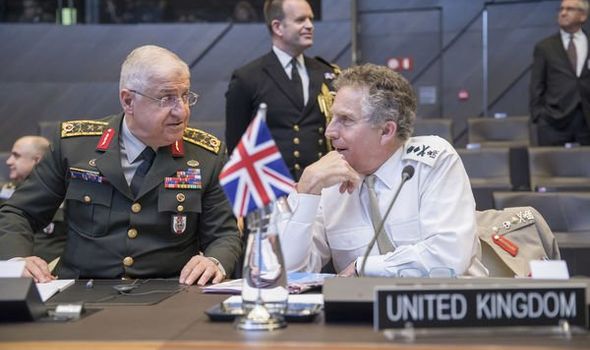 James Heappey, a former infantry major who served two tours of Afghanistan, acknowledged “anger and frustration” over the endgame.

But he told our forces: “We gave a war-torn nation a taste of freedom – we gave them space for an education that can never be taken away.” His comments came as Tony Blair, the PM who sent troops into Afghanistan, blasted the decision to withdraw as “imbecilic”.

In an essay he said news of the withdrawal had left “every Jihadist group round the world cheering” and suggested the world was now asking: “Is this a moment when the West is in epoch-changing retreat?”

Last night it emerged that Britain had objected in the months following US President Joe Biden’s decision to pull out all troops by the 20th anniversary of 9/11.

Senior military sources have revealed how the head of Britain’s armed forces, General Sir Nick Carter, was a sole voice of dissent at a crunch meeting of Nato joint chiefs of staff in Brussels, arguing “our job isn’t over – it is too soon and we are simply not ready”.

His efforts were later backed by Defence Secretary Ben Wallace, who lobbied counterparts ahead of a Nato meeting on June 1 to put the subject of date changes on the agenda – but without success.

As chaos reigned outside Kabul airport yesterday – with reports of four women killed in the crush as they tried to flee – Sir Laurie Bristow, the British Ambassador to Afghanistan, was seen briefing UK troops inside. He has relocated to an emergency handling centre at the airport to process the applications of those seeking to leave for the UK.

Meanwhile it emerged that UK Special Forces had taken part in a daring operation to retrieve 150 “entitled nationals” in the city and bring them home.

It followed a heated altercation between British and US commanders at Kabul airport last week, when members of 2 Para were prevented from a mercy mission by American counterparts who warned: “We won’t come to rescue you if it hits the fan.”

Special Forces went instead, in an operation later last week. They are said to have used abandoned vehicles found at the British Embassy to carry out their part of the mission, which took place in the dead of night.

The 150 were successfully rescued – but military commanders estimate that as many as 5,000 entitled multi-nationals are still living in fear across Kabul. Sources said that the scramble to save innocent civilians from the Taliban could have been avoided had General Carter’s warnings been heeded.

The Military Committee in Chief of Defence Session on May 18 was the first formal chance for Nato’s most senior commanders to discuss Biden’s withdrawal declaration of April 13.

A highly placed source said last night: “Carter remained calm but he did not hold back. For him it was an issue of conscience, of moral obligation, and he knew he had the backing of Government.

“He argued with Mark Milley [US Chairman of the Joint Chiefs of Staff] that it’s the wrong time, we’re not done, we’re not ready and we just shouldn’t do it. He was met with silence.

“Not one Nato ally nodded their head, let alone supported him vocally. It was, as they say, a tumbleweed moment.” Defence secre- tary Wallace then personally lobbied counterparts ahead of a crucial meeting of Nato’s North Atlantic Council in June. “By then, it was clear that forming any sort of military coalition to hold the line after the US pulled out was not going forward, despite some interest by Canada and Italy. We just didn’t have the capability,” said the insider.

“Wallace tried, but he wasn’t even able to get a change of dates on to the agenda. The sense was that the US mandate was over. There was nothing left to discuss.”

‘He was with Former head of the British Army, General The Lord Dannatt, said: “Nick (Carter) was heavily invested in trying to find a way we could stay longer. Of course, this was with the backing of the Government.”

The Prime Minister will also be addressing the future of Afghanistan in a meeting with the G7 next week, attended by President Biden.

A senior Government source said: “The UK has absolutely been front and centre of the diplomatic effort on Afghanistan. We’re leading at the G7, the UN Security Council and Nato, and the Prime Minister has been on the phone to world leaders every day this week co-ordinating on evacuations and action.

“We’ve doubled our humanitarian aid to Afghanistan and will be urging others to step up at next week’s G7.”

Meanwhile, Foreign Secretary Dominic Raab is coming under more pressure as it was reported that he stayed two extra days on holiday after being ordered back.

He is already under fire after he refused to interrupt his luxury break in Crete to call his Afghan counterpart to arrange evacuation flights, leaving it to a junior minister instead. The call was not then made at all due to the “rapidly deteriorating situation”.

Now it has been reported that Mr Raab was advised to return to London on Friday, when Kabul was falling to the Taliban, but did not leave until Sunday – as Mr Johnson had agreed he could stay a bit longer.

A senior Government official told The time’s there was “disbelief” Mr Raab was not back at his desk, and said: “He seems to have nobbled Boris after he was told to come back.”