The Tory leadership favourite said she would help drive a multibillion pound boom in the West Midlands. 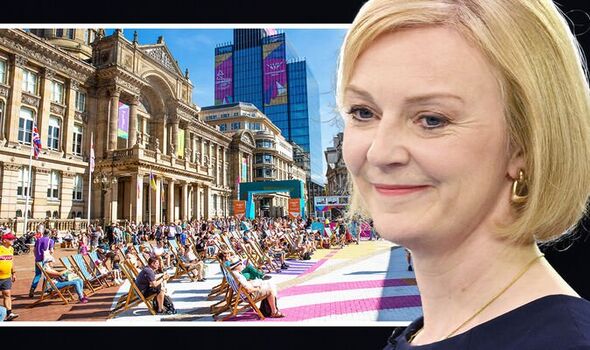 Ahead of the Conservative Party hustings in Birmingham, the Foreign Secretary pledged to deliver key projects, including a proposed battery gigafactory.

Meanwhile, Rishi Sunak indicated he would turn down a Cabinet job and return to the backbenches if he lost the race for No10.

Ms Truss, below, said: “My bold vision for lower taxes, supply side reform and regulation that works for our businesses will utilise the power of the West Midlands economy to boost opportunity for people across the region.

“From Coventry’s cars to Stoke’s ceramics, the West Midlands is a vital part of the UK’s economic engine, and plays host to some of the most innovative industries and companies in the country.”

Ms Truss, who yesterday won the backing of Asia minister Amanda Milling, added: “The West Midlands can play a critical role in a new economic revolution in Britain. I will cut taxes on families and firms, support vital infrastructure tcture and create new Investment Zones.”

It has been suggested Ms Truss could offer rival Mr Sunak the role of Health Secretary if she becomes Prime Minister.

But the former chancellor indicated their differences over the economy were too great for him to be in her top team.

Mr Sunak, who cited irreconcilable differences with Boris Johnson over spending and tax cuts, said yesterday: “I’m not thinking about jobs for me or anyone else.

“One thing I have reflected on as well a bit, is being in the Government, in Cabinet over the last couple of years – you really need to agree with the big things. It’s tough, as I found out, when you don’t, and I wouldn’t want to end up in a situation like that again.”

Mr Sunak, who spoke at a Conservative Friends of India event in Harrow, unveiled plans last night to make the UK a “science superpower”.

He called the West Midlands the “birthplace of the first Industrial Revolution” and pledged a “better UK alternative” to the EU’s Horizon f unding programme.

It is the latest issue to spark a row between the UK and the EU. Last week, the Government told the European Commission to “end persistent delays” to the UK’s access to EU scientific research programmes, following Brexit.