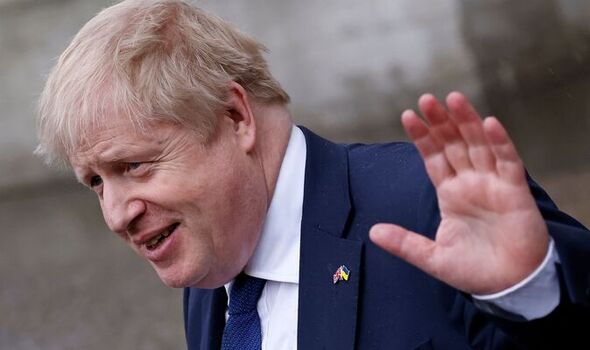 The Prime Minister said he “understands the anguish” of those who have not been able to see their loved ones during the pandemic. But campaigners want him to put his words into action by legislating, so the scandal of the past two years never happens again.

The call comes after this newspaper fearlessly chronicled their plight and heartbroken relatives gathered in Parliament to tell their stories, moving dozens of MPs to tears.

In a letter to Downing Street Labour grandee Harriet Harman, chair of the powerful cross party Joint Committee on Human Rights, said: “Individual care homes are able to decide which rules to follow, because compliance with the guidance is not mandatory. Indeed, we have seen reports that care homes are applying restrictions inconsistently.

“Ruthie Henshall, ambassador for [campaign group] Rights for Residents, recently told this committee ‘Because [the guidance] is not law, it has become interpreted by each care home, and it is a postcode lottery as to where you live and whether you get even a half-hour visit every two or three weeks.’

“The imposition of restrictions risks potentially breaching the rights of patients, residents, and their family members, including their right to family life and their right to liberty and security. This committee has repeatedly called on the Government to ensure compliance with the visiting guidance by placing it on a statutory footing. Meaningful visits must be facilitated whenever possible, in all care settings.

She has given Mr Johnson until March 31 to respond.

Mr Johnson’s admission at Prime Minister’s Questions was the first high-level acknowledgement of the two-year visiting scandal during which relatives have been repeatedly denied the right of seeing loved ones in care because no legal right of access exists to protest them.

In many cases MPs were unaware of the scale of the crisis until they heard harrowing stories during a session co-chaired by former Loneliness Minister and breast cancer survivor Tracey Crouch.

Actress Ruthie, 54, said the abandonment of older people across Britain will never be forgotten and described it as “criminal”. After losing her mother Gloria during lockdown she has become a figurehead for hundreds of thousands without a voice.

Bereaved families told MPs how all vulnerable people need a legal right to have a care supporter – a relative or friend to help them wherever needed, in hospitals, care homes or GP surgeries. It would mean families having the final say on access, rather than being held at the mercy of care homes and providers who currently dictate terms.

Ruthie said: “The only way to wrestle back power is to legislate. It should not take hundreds and thousands of families to shout, consistently and loudly to those in power, that we need to do the right thing and not leave people in care on their own. The anger, hurt and betrayal we have experienced will not be forgotten.”

Ruthie’s father David died at 90 a year earlier, but Covid restrictions meant she was unable to cremate him for weeks. When she could, just six family members were allowed to attend the service.

The Mum of two said: “What has happened – and is still going on – is criminal. Two years on from Covid and I can’t even begin to understand why we are still fighting to give people in care a voice.

“It’s clear homes and providers now hold all the power. Families trusted the Government and CQC to oversee them, to facilitate access, but they haven’t. That is what angers me and so many families. We feel fobbed off. It’s like everybody is passing the buck, pointing the finger somewhere else, and nobody is saying – as they should be – this is our problem and this is what we are going to do about it.”

Last year the I’m A Celebrity star led a march on Downing Street demanding the implementation of Gloria’s Law – named after her mother. But the Government refused, saying it had faith in care homes and the CQC to let families in.

Two years on and some are still refusing. Others have said they will charge families for lateral flow tests before granting time-restricted access in a move that could cost some £150 a month from April 1.

Following a request from a constituent, which had come on the back of a few other cases from residents, I co-chaired a cross party meeting with Labour MP Dan Carden on rights for residents in care homes to be able to see loved ones. This followed two years of guidance for care homes regarding coronavirus that has unfortunately meant the loved ones of residents have been unable to see, hug, hold, spend time with them.

In many cases residents have died alone. It is not just elderly residents of care homes this has affected. It also includes the parents of children who are physically disabled or have severe learning difficulties and are in supported accommodation.

It has also involved those who are living well with dementia in the community but who have been unable to have someone with them at hospital appointments.

The campaign groups came together to tell parliamentarians their stories in hope this stops now (many restrictions are still in place in care homes while the rest of us live fairly restriction free) and that a right for residents in a care setting to see people is enshrined in law.

The meeting was not a rant against care home providers, who all recognised were put in a difficult position when Covid was ripping through society and spread into care homes putting vulnerable residents at risk.

In fact everyone completely understood the first lockdown and the restrictions imposed despite the fact it was heartbreaking for all.

But it was after when the guidance became a bit more discretionary and so with it did the interpretation.

I made a confession to the campaigners that while I absolutely agreed with the need for a right to see loved ones I wasn’t 100 per cent sold on the necessity for it to be enshrined in law.

It took about 35 minutes for me to be convinced it needed to be enshrined in law.

By doing so it removes any discretionary interpretation and enables the loved ones of residents to be able to see them.

The stories we heard were traumatic. In my 11 and a bit years of being an MP there have been very few meetings like it. I will continue to work with Dan and other colleagues from across the House to enhance the rights of those who live in a care setting.