WASHINGTON — The Capitol Police department on Tuesday delivered to Congress its first after-action report since the deadly pro-Trump assault on the Capitol, laying out a dismal picture of failure to prepare adequately despite knowing days ahead of time that right-wing extremists could target lawmakers.

Testifying by videoconference to a closed session of a House committee, the acting chief of the Capitol Police, Yogananda D. Pittman, acknowledged that the department knew there was a “strong potential for violence” but failed to take necessary steps to prevent what she described as a “terrorist attack.”

Officers were outmanned, had poor communications, lacked sufficient supplies and struggled to carry out orders like locking down the building, she said.

Her comments were the fullest account to date from the department about its preparations for and response to the events of Jan. 6, when thousands of angry protesters, believing false claims that the election had been stolen, marched on the Capitol, urged on by President Donald J. Trump.

Chief Pittman, who became acting chief after the riot, told members of the House Appropriations Committee, which oversees funding for the agency, that the Capitol Police “failed to meet its own high standards as well as yours.” She added, “I am here to offer my sincerest apologies on behalf of the department.”

Her testimony also marked the beginning of what is likely to be a series of hearings investigating the law enforcement failures that allowed the building to be occupied for the first time since the War of 1812.

“By Jan. 4., the department knew that the Jan. 6 event would not be like any of the previous protests held in 2020,” Chief Pittman testified. “We knew that militia groups and white supremacists organizations would be attending. We also knew that some of these participants were intending to bring firearms and other weapons to the event. We knew that there was a strong potential for violence and that Congress was the target.”

But when the protest grew violent, the department was hampered by a series of problems, she said.

Just as the mob around the Capitol was swelling, the department had to divert some officers away from the building to respond to the discovery of pipe bombs at the nearby offices of the Republican National Committee and the Democratic National Committee — live devices that would have exploded had they not been defused.

The department was also badly outmanned, given the size of the crowd that converged on the Capitol, she said. Chief Pittman said the Capitol Police had 1,200 people working on site when the attack occurred — with only 170 officers equipped with riot gear — which was “no match” for what she called “the tens of thousands of insurrectionists” in Washington that day, hundreds of whom would later enter the Capitol building.

In testimony prepared for her video appearance before the House Appropriations Committee, Chief Pittman also suggested that officers were underequipped for the violence they faced and did not have easy access to the additional supplies of chemical sprays and other substances they needed to disperse the crowd. “Instead, the department had to send in personnel to reload our officers,” she said.

Communications also faltered, she said, with some officers unable to hear on their radios over the din of the crowd. “Without a clear line of communication, officers were operating with limited information about what was occurring and with little instruction from leadership,” she said.

Among the biggest problems, she suggested, was a delayed response to a plea from her predecessor, Steven Sund, who was chief on the day of the attack and resigned in its aftermath, for the deployment of National Guard troops to help.

Two days before the attack, Chief Sund asked that the Capitol Police Board declare a state of emergency and authorize a request to secure National Guard support. The board denied the request, according to Chief Pittman’s testimony, but encouraged Chief Sund to contact the National Guard to determine how many members could be sent to the Capitol on short notice, which he did.

As the crowd became an increasing threat to the Capitol on Jan. 6, Chief Sund asked for more help from federal agencies and law enforcement agencies in the area. “He also lobbied the board for authorization to bring in the National Guard, but he was not granted authorization for over an hour,” Chief Pittman said.

According to a timeline the Defense Department provided to the committee, Mayor Muriel E. Bowser sought help from the Army at 1:34 p.m., and Chief Sund called for the D.C. National Guard at 1:49 p.m. But the Army did not approve deploying the Guard until 3 p.m. and its members did not arrive at the Capitol to help until 5:40 p.m., more than four hours after Ms. Bowser’s plea.

Two of the members of the Capitol Police Board at the time of the attack have already resigned: Paul D. Irving, the House sergeant-at-arms, and Michael C. Stenger, the Senate sergeant-at-arms. The third member, J. Brett Blanton, the architect of the Capitol, is still on the board. Mr. Blanton said in a statement that he was not included in any discussions about deploying the National Guard.

During the hearing, the commander of the D.C. National Guard told committee members that his authority to quickly deploy the Guard was removed before the Jan. 6 event.

Maj. Gen. William J. Walker, the commanding general of the District of Columbia National Guard, said he had such authority for the Fourth of July, but the Pentagon required additional approval for a request for the Guard during the Jan. 6 attack, according to three sources familiar with his testimony.

General Walker testified that Chief Sund called him as the threat to the Capitol increased on Jan. 6 and that he immediately notified the Army.

“On my own, I started preparing people to be ready, but I had to wait for specific approval to go out to launch,” General Walker said.

Representative Dutch Ruppersberger, Democrat of Maryland, said he found the briefing for the committee “extremely frustrating.”

“There was testimony Pentagon officials restricted the D.C. National Guard’s ability to act. We want to know who restricted his authority and why,” Mr. Ruppersberger said. “Why were there only 170 police in riot gear? Clearly the intelligence was there. We had it. We didn’t act upon it.”

Lawmakers, some of whom were trapped on the House floor and in the House gallery as the mob tried to break into the chamber, have been furious with the security lapse.

“Today, we learned that the attack on the People’s House was preventable and that the government agencies tasked with keeping our country safe failed in their most basic responsibilities,” said Representative Rosa DeLauro, Democrat of Connecticut and the chairwoman of the Appropriations Committee. “To comprehensively protect the seat of government, meaningful reforms are critical. We will continue to pursue answers to the questions that we did not cover today.” 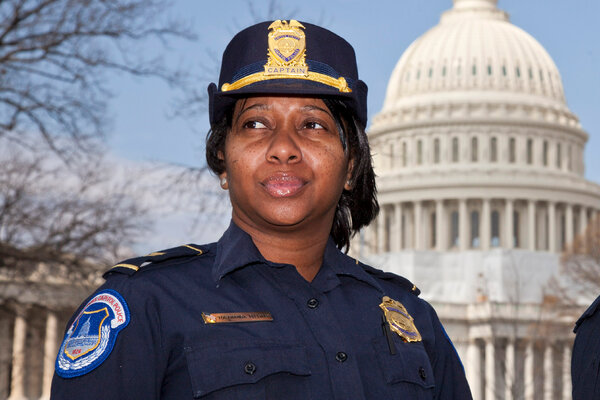 Speaking to reporters after the briefing, Representative Tim Ryan, Democrat of Ohio, called the hearing “the beginning of the beginning” and said that “there are still a lot of questions that are out there that need to be teased out.”

From Riot to Impeachment

The riot inside the U.S. Capitol on Wednesday, Jan. 6, followed a rally at which President Trump made an inflammatory speech to his supporters, questioning the results of the election. Here’s a look at what happened and the ongoing fallout: