UK and Irish residents returning from 33 “red list” countries will have to pay £1,750 to quarantine in hotels for 10 days, Health Secretary Matt Hancock has told MPs.

As part of a new quarantine system, due to come into force from Monday next week, the government has booked 4,600 rooms across 16 hotels for those arriving from certain countries.

Passengers will have to book online before their travel, with the £1,750 fee also including the cost of COVID testing and their escorted travel between an airport and their designated hotel.

Live COVID updates from the UK and around the world 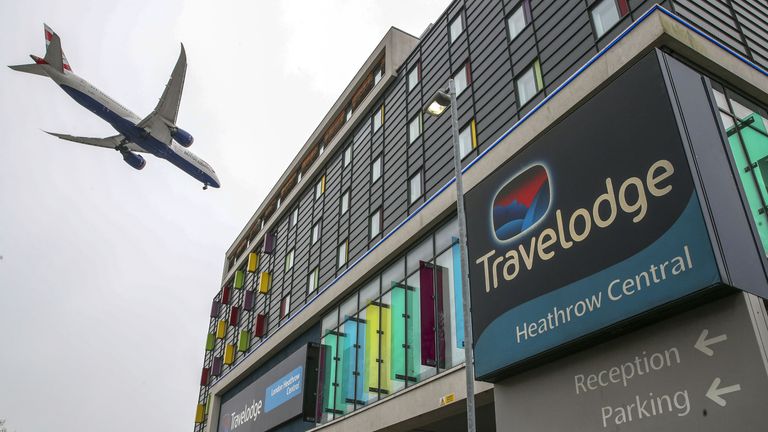 The action has been taken as part of the government’s response to concerns that new COVID variants – which could be more resistant to vaccines – might be imported from abroad.

Mr Hancock told the House of Commons that “responding to new variants as soon as they arise is mission critical to protect ourselves for the long term”.

Detailing the new border measures, the health secretary told MPs: “Passengers will only be able to enter the UK through a small number of ports that currently account for the vast majority of passenger arrivals.

“When they arrive, they’ll be escorted to a designated hotel, which will be closed to guests who aren’t quarantining, for 10 days or for longer if they test positive for COVID-19 during their stay.”

The countries currently on the UK’s “red list” include those in South America, large parts of southern Africa, Portugal and the UAE.

The health secretary said those placed in hotel quarantine will “need to remain in their rooms and of course will not be allowed to mix with other guests”.

He added there would be “visible security in place to ensure compliance alongside necessary support”.

Those who fail to quarantine in a designated hotel face fines of up to £10,000 while anyone who tries to conceal they had been in a country on the “red list” in the 10 days before returning to the UK will face a prison sentence of up to 10 years, Mr Hancock said.

“People who flout these rules are putting us all at risk,” he told MPs.

The health secretary also confirmed that those arriving from all countries – not just those on the “red list” – would now be required to take a PCR test on days two and eight after their arrival in the UK, as part of a 10-day quarantine period.

Anyone planning to travel to the UK from Monday will need to book the new post-arrival tests through an online portal before their journey.

Those arriving in the UK had already been required to show proof of a negative test result from up to 72 hours before their journey.

“If either of these post-arrival tests comes back positive, they’ll have to quarantine for a further 10 days from the date of the test and will of course be offered any NHS treatment that’s necessary,” Mr Hancock said.

“Any positive test will automatically undergo genomic sequencing to confirm whether they have a variant of concern.”

There will be fines of up to £2,000 and a possible extension of their quarantine period to 14 days for those who fail to comply with the new testing requirements, the health secretary told the House of Commons.

The 33 countries currently on the UK’s “red list” are:

Over three nights Sky News will host a series of special programmes examining the UK’s response to the pandemic.