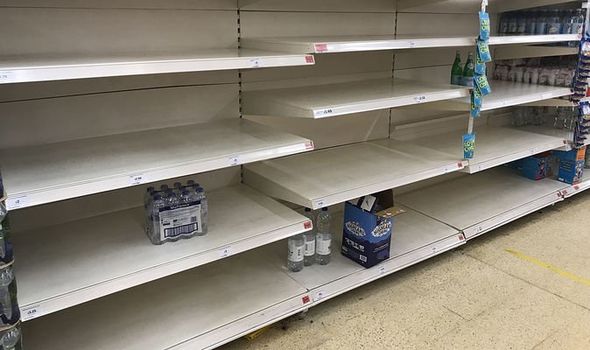 Boris Johnson apologised to businesses for the disruption. But he insisted the test-and-trace app that alerts people when they have come into contact with a Covid case is a vital tool in the battle against the virus. Business chiefs demanded urgent action to stop supplies being hit further, as shoppers posted pictures of empty shelves in supermarkets across the country.

The British Retail Consortium called for staff in stores and suppliers to be allowed to work even if they get an alert to self-isolate.

“Retail workers and suppliers, who have played a vital role throughout this pandemic, should be allowed to work provided they are double-vaccinated, or can show a negative Covid test, to ensure there is no disruption to the public’s ability to get food and other goods.

“With community cases soaring, the number of healthy retail staff having to self-isolate is rising fast, disrupting retail operations.”

British Meat Processors’ Association chief executive Nick Allen said some members were reporting up to 10 percent of their workforce had been pinged by the app.

He warned: “Until now we’ve managed to keep the food supply chain running but there’s a sense of, we’re starting to fail on that front.”

He complained that a Government exemption from isolation for a small number of double-jabbed critical workers was for “very, very few people”.

Emergency services, public transport and postal deliveries have all been hit by staff shortages in recent days.

The Prime Minister insists isolation rules will remain in place until August 16, when a testing regime will replace the requirement for fully vaccinated contacts to quarantine.

Anyone contacted by the NHS Test-and-Trace team must isolate by law, but those pinged by the app are not legally required to do so.

Mr Johnson is still working from Chequers after he was pinged last weekend. He told MPs yesterday: “I apologise to everybody in business up and down the land in all kinds of services, public sector or otherwise, who are experiencing inconvenience.

“We will be switching, as the House knows, to a system based on contact testing rather than contact isolation. But until then I just must remind everybody that isolation is a vital tool of our defence against the disease.”

Whitehall is running an exemption scheme that allows a few thousand workers in critical jobs to avoid isolation if they have been double-jabbed.

She added: “The Prime Minister has also said we will make sure that crucial services will be able to continue to operate, even recognising that many people are at the moment isolating and that goes beyond health and social care.”

But emergency services reported being hit by the chaos.

A police and crime commissioner has warned that call response times will rise due to the pingdemic.

It was reported that five officers were taken off duty and self-isolating in just one incident after they came into contact with a virus-positive prisoner.

Steve Turner, police and crime commissioner for Cleveland, called for healthy emergency workers to be tested daily for Covid so they would not automatically be taken off frontline duties.

He said: “Our call times will go up, we will miss some calls we would normally pick up because we have less resilience in the call centre.

“All of these things will have a knock-on effect for the Cleveland public.”