The Prime Minister has said he is only willing to agree a deal with the EU if it recognises the UK is a sovereign state with control of its own laws and waters. Negotiations remain gridlock with neither the UK nor Brussels willing to back down on their demands to make a deal happen.

Today, the Prime Minister’s spokesman indicated the EU would need to be the side that budged if a deal was to be done as the UK would not compromise on its demands.

Asked if there could be a deal without a change of the EU’s red lines, the Prime Minister’s spokesman said this afternoon: “We’ve been clear on our negotiating position around the need for any agreement to respect our sovereignty. That remains the case.

“The purpose of the in-person meeting will be to see if there is a political way through.

“It remains the Prime Minister’s ambition to reach a free trade agreement.”

Mr Johnson told a meeting of his Cabinet this morning that he remained determined to try and find a way through the impasse currently plaguing the trade talks.

However, he made clear any deal had to respect the UK’s red lines and Britain would thrive even if it left the EU transition period on December 31 without a deal.

The Prime Minister and Ms von der Leyen last night agreed to meet face-to-face in a final attempt to secure a trade deal before time runs out at the end of the year. 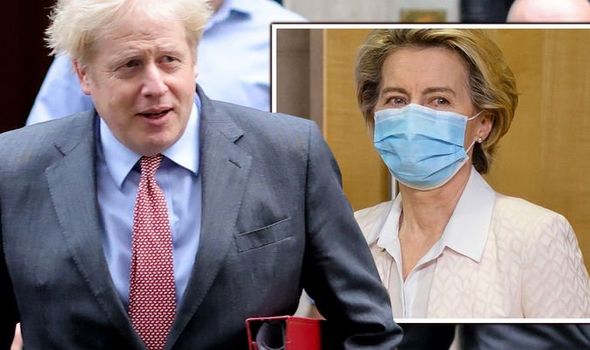 The pair held a phone call to “take stock” after negotiators Michel Barnier and David Frost spent Sunday and Monday in Brussels trying to overcome the differences.

However, with little progress made it was decided Mr Johnson would fly to Brussels himself in an attempt to clinch a deal.

“We agreed that the conditions for finalising an agreement are not there due to the remaining significant differences on three critical issues: level playing field, governance and fisheries.

“We asked our Chief Negotiators and their teams to prepare an overview of the remaining differences to be discussed in a physical meeting in Brussels in the coming days.”

Mr Frost will travel back from Brussels this afternoon before meeting with the Prime Minister this evening to discuss where the remaining differences in opinion.

Exact details of when Mr Johnson will travel to the Belgium capital to meet with the European Commission President remain unclear.

A No10 source has urged caution on expecting a breakthrough in negotiations when Mr Johnson and Ms von der Leyen meet.

They said: “Talks are in the same position now as they were on Friday.

“We have made no tangible progress. It’s clear this must now continue politically.

“Whilst we do not consider this process to be closed, things are looking very tricky and there’s every chance we are not going to get there.”