President Biden vowed, “We’re going to get this done,” as Senate Democrats began drafting the details on a social and environmental bill that could yield transformative change. 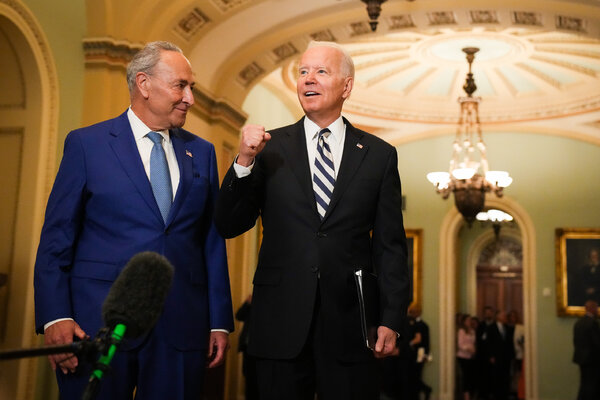 By Jonathan Weisman and Emily Cochrane

WASHINGTON — President Biden and congressional Democrats vowed on Wednesday to push through a $3.5 trillion budget blueprint that would shepherd a transformative expansion of social and environmental programs into law, beginning an arduous drive to enact their vision for extending the reach of public education and health care, taxing the rich and trying to stem the warming of the planet.

The legislation is far from reality yet, but the details top Democrats have coalesced around are far-reaching. Prekindergarten would be universal for all 3- and 4-year-olds, two years of community college would be free, utilities would be required to produce a set amount of clean energy and prescription drug prices would be lowered. Medicare benefits would be expanded, and green cards would be extended to more undocumented immigrants.

At a closed-door luncheon in the Capitol, Mr. Biden rallied Democrats and the independents aligned with them to embrace the plan, which would require each of their votes to move forward over united Republican opposition. Yet crucial moderates had yet to tip their hands about whether they would welcome such an expansive proposal.

Mr. Biden’s message to senators, said Senator Richard Blumenthal of Connecticut, was that Democrats “need to be unified, strong, big and courageous.”

“We’re going to get this done,” Mr. Biden told reporters at the Capitol.

The Senate could begin advancing the plan in weeks, though a final vote could be months away and will face multiple hurdles. For now, Democrats and their independent allies insist they are together, even as moderates declined to commit to the package without further details.

Speaker Nancy Pelosi, who must ultimately get the package through a narrowly divided House, told Democrats in a letter on Wednesday: “This budget agreement is a victory for the American people, making historic, once-in-a-generation progress for families across the nation.”

Senate Democratic leaders have said they aim to pass both the budget blueprint and a narrower, bipartisan infrastructure plan that is still being written before the chamber leaves for the August recess, an extraordinarily complex and politically charged endeavor in a 50-50 Senate.

“This is a moment in history when the United States needs to reassert itself in how we deal with families, how we deal with our children, with the existential crisis of climate change and how we deal with China,” Senator Mark Warner, Democrat of Virginia and one of the key negotiators, told reporters on Wednesday.

Combined with the infrastructure plan, the social spending is intended to deliver on Mr. Biden’s $4 trillion economic proposal. Democrats on the Senate Budget Committee must produce a budget resolution in the coming days that includes so-called reconciliation instructions to other Senate committees, which in turn will draft legislation detailing how the $3.5 trillion would be spent — and how taxes would be raised to pay for it.

That would pave the way for Democrats to produce a reconciliation bill this fall that would be shielded from a filibuster, allowing them to circumvent Republican opposition but requiring all 50 of their members — and a majority in the narrowly divided House — to pass it.