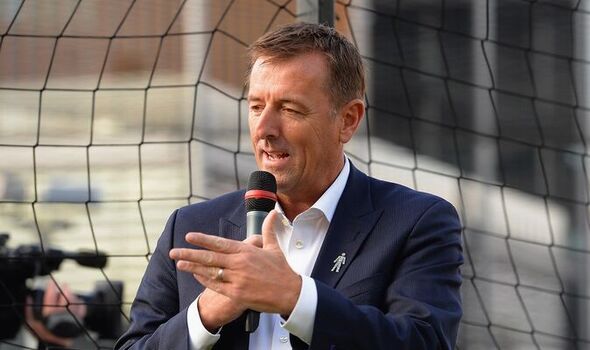 In a frank interview, the former player who is one of the nominees for the Premier League’s Hall of Fame, admitted that he had not had much interest in politics until he was “awakened” to the threat of cancel culture during the coronavirus lockdown.

“I’ve never been political. I don’t think I have ever voted in a general election.

“All I wanted was let me live my life how I live it, leave me alone, I pay my taxes; I’ll do my bit to help people; I’ll do my bit for charities for people far worse off than me; I do my bit for society and make this world a better place; just don’t encroach on my life.”

As a footballer Le Tissier scored 161 goals in 443 appearances for Southampton and won eight England caps.

But he has found it harder to tackle some of the attempts to sideline free speech in the last two years, particularly around the coronavirus and lockdown debates.

He has been very critical of policies such as trying to force people to have the vaccine and lockdowning the country which is now causing a cost of living crisis.

But he found that this led to him and others being shut down and argued that it was important to have open debate and be able to disagree.

“I have always enjoyed interacting with the public. Shopping centres in Southampton. Been the same in social media.

“I don’t mind differences of opinion. I like learning. If someone disagrees with me I am happy to listen and if what you say is better I am happy to change my mind.”

The Southampton star added: “I felt I had to speak out even if it cost me work then so be it. It might cost me a few friends, I don’t think I have upset anyone to that point yet.
“I didn’t like what I was seeing which was the stifling of any debate that went against the Government narrative.”

He went on: “That’s what is frustrating me, the censorship, the shutting down, the Government almost taking over every television station and threatening rhythm if they don’t conform to the Government narrative.

“When I was growing up, that’s what we were told was bad about China. Now we are living right through that in this country here and I don’t want to live in that world.”

Mr Le Tissier, who played for Southampton for 17 years and then became a feature on Sky Sports’s Soccer Saturday show, spoke to the Sunday Express to announce his new livestream show on the GETTR social media platform.

He joined GETTR in January after becoming disillusioned with the way people were being cancelled and censored on other social media platforms like Twitter “for innocuous things”.

“I like to have a bit of a laugh, I love to express my opinions and I like to hear people’s different opinions as long as it doesn’t come with abuse.

“The content on GETTR is very respectful. It has been a very different experience and far more enjoyable than being on Twitter.”

The end of his contract with Sky Sports also played in with the cancel culture issues.

“That’s a whole different debate. Again it’s nuanced. If you try to have that debate though you get labelled as a racist and they shut you down. I’m not comfortable with that because I’m not a racist.”

He added: “I got labelled as an anti vaxxer. I have had every vaccination I could have had until this one. Because I have chosen to wait a bit for some long term safety data which there was none of , because I took that decision suddenly I’m an anti vaxxer. Just get real!”

He also warned against the Government’s online harms bill, suggesting that it could be used by extremists tio shut down free speech further. He said: “There’s a lot of things I see that look good on paper but when you see the ramifications of it you get scared of how it could be used.

“They give you all the good bits that they think will keep you safe but they don’t talk about how the infrastructure of that agreement can be abused and for someone to use it in a very bad way.”