A face-off between Royal Navy and French navy patrol vessels ended without incident as protesting French fishermen left waters around the Channel Island on Thursday. It was the threat by French maritime minister Annick Girardin that France, a Nato ally and defence partner, may cut off Jersey’s electricity supplies that caused outrage, however. While power generated from its own La Collette Power Station and back-up generators on Queen’s Road would allow Jersey to survive any blockage for a week or so, after that it would be “lights out”.

Appeasing militant French fishermen is not the only problem facing Macron’s Government, as France finds itself trying to contain a ”blending together of generalised anti government unrest’ caused by three controversial new laws.

The global security law proposes to dramatically increase surveillance powers among private, state and security forces and is being resented by BLM supporters who claim it will protect police against brutality cases; the anti-separatist law will, apart from control foreign funding of religious communities ban civil servants from wearing any religious symbols and the climate reforms are still attracting so-called yellow vest protests.

As he grapples to keep Marie Le Pen at bay in next year’s presidential elections critics in France have suggested that attacks against “Perfidious Albion” by Macron, now the EU’s most influential leader on foreign policy may be needed.

But last night analysts from Sibylline, a UK threat assessment firm which advises the British Government,  said France would soon find itself isolated in Europe if it sanctioned such a move.

“It must be remembered that Annick Girardin’s remarks were not sanctioned by President Macron – indeed, his spokesman tried to roll back on them,” said Louis Cox-Brusseau, a European analyst for Sibylline. 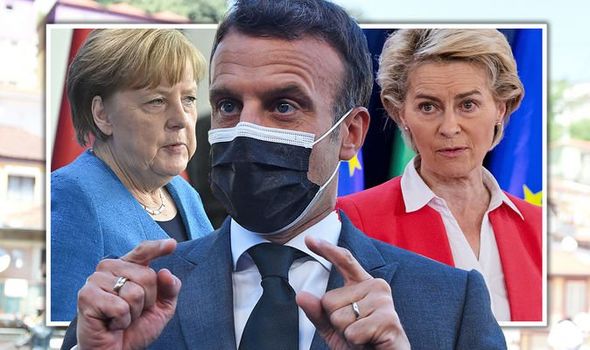 “Resorting to extreme tactics such as cutting off jersey;s energy supplies would be an own goal. It would lead to serious divisions on the European side>’

The EU has learned from its “massive faux pas” when an attempt to invoke Article 16 over Northern Ireland caused such division among members that it was soon abandoned.

He added: “France only has to lead until it oversteps one of the EU’s red lines, and endangering the bloc’s future relations with the UK by interfering with its energy supplies, when Germany is looking to the UK as a future market for its own energy companies, would soon see France isolated.”

The EU has other means at its disposal, however.

“It proves how vitally important this seems to be in Paris.

“Softer but further reaching options like the limitation of financial service access to the  Continent is where we might see this debate going next, if a resolution isn’t found.

“It’s certainly not over.”