The European Union has faced major backlash after the rollout of the coronavirus vaccine suffered major delays in most member states. European Commission President Ursula von der Leyen further ramped up tension between the EU and international partners after threatening to impost a stringent ban on AstraZeneca on exports towards the UK. Knowledge dissemination expert Rasmus Bech Hansen said the behaviour the bloc has adopted in recent weeks sparked an “everyone loses” situation.

Speaking to Sky News, Mr Bech Hansen said: “There’s a huge amount of frustration in the EU and, of course, there is also a bit of a blame game.

“And then the whole rollout with AstraZeneca, the vaccine hesitancy. There’s so much pressure they call it the crisis of the century.”

He continued: “They need to show they can do something about it but the reality is that production is tricky, there is no easy fix.

JUST IN: ‘It’s not blocking!’ EU doctor hits out as she gets frustrated with GMB attack on Brussels 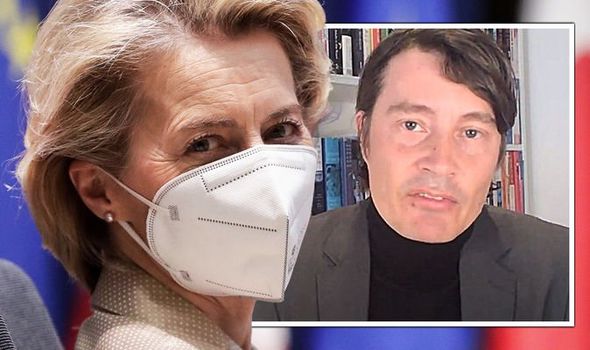 “The best we can hope for, if we can get all the ingredients to flow freely, is that the whole production can ramp up.”

Ms von der Leyen, who is under pressure over the EU’s relatively poor vaccine rollout, has ramped up the rhetoric this weekend, saying the EU has the power to “forbid” exports, adding: “That is the message to AstraZeneca.”

The warning reflects growing frustration on the continent that the EU is not getting the supplies it expected from the British-Swedish manufacturer.

The Prime Minister is expected to contact his EU counterparts ahead of a virtual summit on Thursday where European leaders are due to consider the matter.