With next year’s midterm elections seen as a referendum on Democratic rule, Republicans are trying to create a sense of urgency and diverting focus from their own divisions. 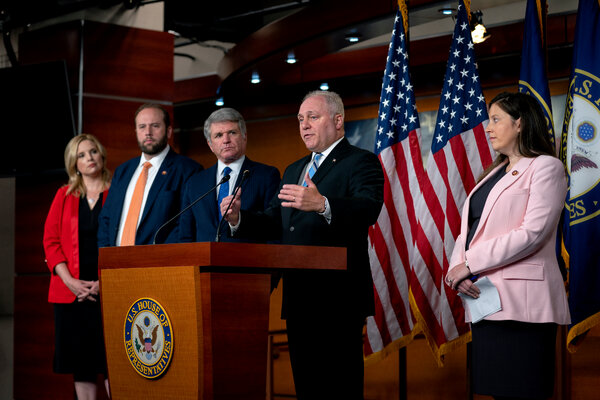 WASHINGTON — House Republican leaders would like everyone to know that the nation is in crisis.

Pressed Tuesday on whether the nation is really so beleaguered, the No. 2 Republican in the House, Representative Steve Scalise of Louisiana, thought of still more crises: anti-Semitism in the Democratic ranks, “yet another crisis,” he asserted, and a labor shortage crisis.

“Unfortunately they’re all real,” he said capping a 25-minute news conference in which the word “crisis” was used once a minute, “and they’re all being caused by President Biden’s actions.”

As Americans groggily emerge from their pandemic-driven isolation, they could be forgiven for not seeing the situation as quite so dire. They might also be a little confused about which of the many outrages truly needs their focus: the border, perhaps, but what about Dr. Anthony S. Fauci and the Wuhan lab leak theory, the teaching of critical race theory in the nation’s schools, the fact that some schools are not fully reopened, Representative Ilhan Omar, or all those transgender athletes competing with biological girls in high school?

But for divided House Republicans, outrage may be the tie that binds — at least their leaders hope so.

“Look, our main crisis is we’re not the majority — that’s our top crisis,” said Representative Tom Cole, Republican of Oklahoma.

House Republicans, still overwhelmingly in the thrall of Donald J. Trump, have learned over the last four years that grievance, loudly expressed, carries political weight, especially with their core voters. Mr. Trump certainly did not teach members of his party how to express anger over perceived injustices; many of them had been doing it for years. But the House Republican leadership has shifted to Trumpian expressions of outrage since the days of former Speaker Paul D. Ryan, a self-described “policy guy” with a happy-warrior image, and the backslapping bonhomie of his predecessor John A. Boehner.

There is a method to all the remonstrance. Representative Elise Stefanik of New York, who took over as the message maestro of the Republican conference after the banishment of Representative Liz Cheney, hatched the crisis strategy as one of her first ventures, Mr. Cole said, distributing talking points this month on the perils facing the country.

The idea is that with Democrats in control of the White House, House and Senate, next year’s midterm elections will be a referendum on one-party control, not on Republican governing plans, said Mr. Cole, a former chairman of the House Republicans’ campaign arm. The Republicans, at least this early in the political cycle, need to seed a sense of instability, overreach and fear, he said.