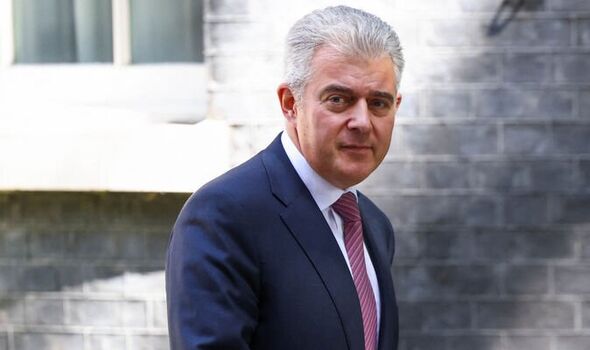 In an exclusive interview with the Daily Express, Northern Ireland Secretary Brandon Lewis also pledged that legal cases against former soldiers who served during the Troubles will end. Mr Lewis will today introduce the second reading in the Commons of the historic Northern Ireland Legacy Bill which is aimed at providing a last chance for the truth to be told about the Troubles. From 2000, the Government issued letters to former IRA terrorists saying they were no longer being pursued for alleged crimes.

John Downey was spared prosecution for the 1982 Hyde Park bomb which killed members of the Household cavalry because he had an immunity document dubbed an ‘on-the-run’ letter.

“Somebody who has one of those letters won’t be able to rely on it to avoid engaging with this body. And if they don’t engage with this body then it can investigate with a view to prosecuting. Those letters are no shield about doing the right thing.”

The legislation will provide former terrorists on both sides of the sectarian divide as well as ex-soldiers with protection as long as they cooperate with a new investigations body which will have full police powers.

Mr Lewis said that the pursuit of soldiers will also come to an end.

And he said lawyers who are trying to file civil cases before the Act is passed “are in for a shock” because the cut-off date was when the Bill was introduced last year.

The new system will be like the South African Peace and Reconciliation Commission, said the Cabinet Minister.

And he noted that military veterans have “always engaged very well” with the process.

But he admitted time is running out with many involved in the troubles reaching old age.