Exams for the summer were cancelled at the start of the year when schools were forced to close as England was plunged into a third national lockdown. Since then the Education Department has been working on how to grade 16 and 18-year-olds.

Details of the grading system will be confirmed in the House of Commons tomorrow.

The Education Secretary said he is “putting its trust in teachers” after the fiasco of last year’s exam results.

There was outrage from parents and pupils last summer as the system used to determine exam grades was deemed to be unfair.

Teachers were encouraged to put forward a recommended grade before a complex computer system was used to try and rank pupils across the country. 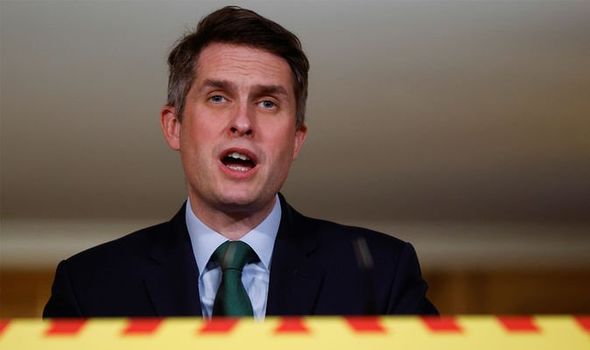 The system saw as many as a third of all grades awarded by schools changed by the centralised algorithm.

In a bid to mitigate the damage the Government was forced into a humiliating U-turn, giving all pupils the grades first awarded by their teachers.

Jonathan Slater, Permanent Secretary at the Education Department, and Sally Collier, the head of Ofqual both resigned following the chaos.

Mr Williamson said there would be “no algorithms whatsoever” used in determining exam grades this time round.

He said: “We are putting trust in teachers.

“That’s where the trust is going – there is going to be no algorithms whatsoever but there will be a very clear and robust appeals mechanism.”

His confirmation of the plan being announced tomorrow came as he outlined how the Government was intending to help school children make up for months of missed learning.

School children of all ages will return to classrooms from March 8, as the first step in Boris Johnson’s roadmap out of lockdown.

Mr Williamson said a £700 million fund was being made available to schools for them to use as necessary to ensure no child falls behind in their learning as a result of the months spent at home.

He told the Downing Street press conference: “As part of this £700 million package that we are rolling out, building on the billion pounds that we announced last year, we are giving schools the tools they need in order to be able to deliver for all children.

“We’ve given schools the flexibility in order to be able to make sure it’s properly targeted to children who need the most help.

“We’re very much supporting all children in our whole school system.”

The money will be used for some children to have extra in-person lessons over the summer holidays.

Classes will be introduced for pupils who need it the most, such as incoming Year 7 pupils, while one-to-one and small group tutoring schemes will be expanded.

Mr Willaimson also used tonight’s televised coronavirus briefing to give a “massive thank you” to teachers, parents and children for their efforts while schools have been shut.

He said: “I want to say once again a massive thank you to our incredible teachers, leaders, support staff and childcare workers.

“You have been going above and beyond to keep schools and colleges open for vulnerable children and children of critical workers, and to keep the remainder of young people learning when they’re at home.

“I also want to thank parents, who have been supporting their children while they learn at home.

“And I want to thank children and young people themselves, for their patience and resilience.

“I know it hasn’t been easy. But you have adapted and done so much to make sure that you’ve been able to continue to learn.”