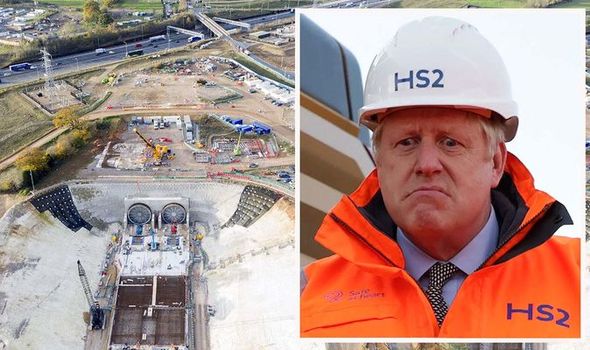 Sources have indicated that Transport Secretary Grant Shapps will formally abandon all or part of the eastern leg of HS2 between Birmingham and Leeds after the Integrated Rail Plan is published. It comes amid growing concerns about HS2’s cost and impact on people’s homes and businesses with no rail yet laid.

A senior government source said that the eastern leg is still “up in the air”.

A Department for Transport (DfT) spokesman told the Sunday Express: “The Integrated Rail Plan will soon outline exactly how major rail projects, including HS2 Phase 2b and other transformational projects such as Northern Powerhouse Rail, will work together to deliver the reliable train services that passengers across the North and Midlands need and deserve.”

North West Leicestershire Conservative MP Andrew Bridgen, whose constituency was impacted by the eastern leg of HS2, said cancellation would be welcome.

He said: “This project’s costs are out of control and it has been a blight on homeowners and businesses in my constituency since it was announced.

“What I fear is that it might be mothballed instead of being cancelled which would mean the blight on my constituency would continue indefinitely.”

According to sources from the Northern Transport Partnership, there are also concerns that a promised budget of £50billion for Northern Powerhouse rail from Manchester linking the west coast to the east will be severely trimmed and end up with a cheap option of an upgrade of the Transpennine Line to Leeds.

A DfT source said: “We are committed to enabling the East Midlands, Yorkshire and the North East to reap the benefits of high-speed rail services.

“The Integrated Rail Plan will consider how to sequence the delivery of Phase 2b to ensure benefits are realised to a quicker timescale and to ensure it is integrated with plans for Northern Powerhouse Rail (NPR) and other rail investment projects.

This would be a major setback in Boris Johnson’s promise to deliver “levelling up” for the north of England.

The DfT has strongly denied “not true” and “false” claims from a whistleblower that the real cost of HS2 is now at least £160.6billion and could be as high as £200billion.