At 1:51 p.m. on Jan. 6, a right-wing radio host named Michael D. Brown wrote on Twitter that rioters had breached the United States Capitol — and immediately speculated about who was really to blame. “Antifa or BLM or other insurgents could be doing it disguised as Trump supporters,” Mr. Brown wrote, using shorthand for Black Lives Matter. “Come on, man, have you never heard of psyops?”

Only 13,000 people follow Mr. Brown on Twitter, but his tweet caught the attention of another conservative pundit: Todd Herman, who was guest-hosting Rush Limbaugh’s national radio program. Minutes later, he repeated Mr. Brown’s baseless claim to Mr. Limbaugh’s throngs of listeners: “It’s probably not Trump supporters who would do that. Antifa, BLM, that’s what they do. Right?”

What happened over the next 12 hours illustrated the speed and the scale of a right-wing disinformation machine primed to seize on a lie that served its political interests and quickly spread it as truth to a receptive audience. The weekslong fiction about a stolen election that President Donald J. Trump pushed to his millions of supporters had set the stage for a new and equally false iteration: that left-wing agitators were responsible for the attack on the Capitol.

In fact, the rioters breaking into the citadel of American democracy that day were acolytes of Mr. Trump, intent on stopping Congress from certifying his electoral defeat. Subsequent arrests and investigations have found no evidence that people who identify with antifa, a loose collective of antifascist activists, were involved in the insurrection.

But even as Americans watched live images of rioters wearing MAGA hats and carrying Trump flags breach the Capitol — egged on only minutes earlier by a president who falsely denounced a rigged election and exhorted his followers to fight for justice — history was being rewritten in real time.

Within hours, a narrative built on rumors and partisan conjecture had reached the Twitter megaphones of pro-Trump politicians. By day’s end, Laura Ingraham and Sarah Palin had shared it with millions of Fox News viewers, and Representative Matt Gaetz of Florida had stood on the ransacked House floor and claimed that many rioters “were members of the violent terrorist group antifa.”

Nearly two months after the attack, the claim that antifa was involved has been repeatedly debunked by federal authorities, but it has hardened into gospel among hard-line Trump supporters, by voters and sanctified by elected officials in the party. More than half of Trump voters in a Suffolk University/USA Today poll said that the riot was “mostly an antifa-inspired attack.” At Senate hearings last week focused on the security breakdown at the Capitol, Senator Ron Johnson, a Wisconsin Republican, repeated the falsehood that “fake Trump protesters” fomented the violence.

For those who hoped Mr. Trump’s don’t-believe-your-eyes tactics might fade after his defeat, the mainstreaming of the antifa conspiracy is a sign that truth remains a fungible concept among his most ardent followers. Buoyed by a powerful right-wing media network that had just spent eight weeks advancing Mr. Trump’s baseless claims of voter fraud, pro-Trump Republicans have succeeded in warping their voters’ realities, exhibiting sheer gall as they seek to minimize a violent riot perpetrated by their own supporters.

If anyone was responsible for desecrating the Capitol, Mr. Johnson said in a radio interview as the violence was unfolding that day, “I would really question whether that’s a true Trump supporter or a true conservative.”

In a telephone interview last week, Mr. Johnson delivered a handful of unsubstantiated or false statements that dovetail with much of the right-wing disinformation about the riot circulating online and on conservative radio and television programs. The senator said that while most of the people arrested at the Capitol were right-wing Trump supporters, he had not reached any conclusions about the political affiliations of those responsible for planning it.

He said he had “seen videos of other people claiming to be antifa” preparing in their hotel rooms.

“I don’t know if any of that’s been verified,” Mr. Johnson added. 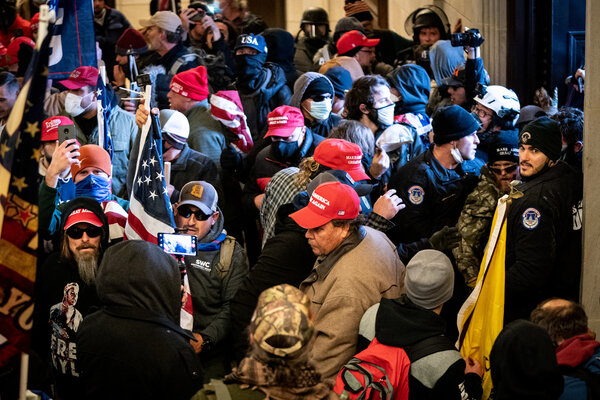 A lie that outraced the truth

A review of media activity in the immediate aftermath of the Jan. 6 riot reveals just how quickly the right-wing media machine, first online and then on radio and cable TV, advanced the fiction about antifa’s supposed involvement.

The conspiracy gained new momentum after The Washington Times, a right-wing newspaper, published an online article shortly before 2:30 p.m. claiming that a facial recognition firm had identified antifa activists in the crowd at the Capitol. The newspaper corrected the article less than 24 hours later, after its claims were proved false — but not before the story made an enormous impact. The article eventually amassed 360,000 likes and shares on Facebook, according to CrowdTangle, a tool owned by Facebook and used for analyzing social media.

From 4 p.m. to 5 p.m., the antifa falsehood was mentioned about 8,700 times across cable television, social media and online news outlets, according to Zignal Labs, a media insights company. “Remember, Antifa openly planned to dress as Trump supporters and cause chaos today,” said one tweet that collected 41,100 likes and shares.

Snopes, the online fact-checking outlet, had already debunked the false antifa narrative — but its story attracted only 306 likes and shares on Twitter at the time, an indication of how difficult it is for fact-checking efforts to gain traction over the original falsehood.

Rumors require a receptive audience to take hold, and Mr. Trump’s supporters had long been primed to accept a baseless claim that antifa — relentlessly portrayed by the president as a dangerous terror group — had instigated the violence, rather than their fellow MAGA fans.

In May, Mr. Trump announced that the United States would declare antifa a domestic terrorist group, despite lacking clear authority to do so. Falsehoods about busloads and planeloads of antifa activists traveling the nation to sow violence became a common trope on right-wing internet sites, even prompting some Americans to ask local law enforcement for help.

At the first presidential debate in September, seen by 73 million people, Mr. Trump said “somebody’s got to do something about antifa and the left.” (In the same answer, Mr. Trump declined to condemn the Proud Boys, a far-right extremist group that has endorsed violence.)

This drumbeat meant that the notion of left-wing activists disrupting the Electoral College to embarrass Mr. Trump might not have seemed far-fetched to the president’s supporters — even those in Congress.

Hours after the attack, Representative Mo Brooks of Alabama, a Republican who had served as a warm-up speaker for Mr. Trump at the pre-riot rally, promoted the false antifa claims on national television.

“We did have some warning that there might be antifa elements masquerading as Trump supporters in advance of the attack on the Capitol,” Mr. Brooks told the Fox Business host Lou Dobbs. He amplified his baseless claim the next morning in a Twitter thread that was retweeted nearly 19,000 times. “Evidence, much public, surfacing that many Capitol assaulters were fascist ANTIFAs, not Trump supporters,” Mr. Brooks wrote, providing no evidence. “Time will reveal truth. Don’t rush to judgment.”

In an interview last week, Mr. Brooks admitted that he had not verified his information before airing it publicly. But he insisted that several members of Congress — whom he would not identify — had warned him about an antifa presence in Washington, prompting him to sleep in his congressional office for two nights preceding Jan. 6.

Mr. Brooks now says that the role of antifa and Black Lives Matter “appears to be relatively minimal compared to the roles of more militant elements of other groups.” He said in the interview that he had “very frequently cautioned that the information that we’re getting is incomplete, preliminary” — a caveat that went unmentioned in his incendiary tweets at the time.

From Riot to Impeachment

The riot inside the U.S. Capitol on Wednesday, Jan. 6, followed a rally at which President Trump made an inflammatory speech to his supporters, questioning the results of the election. Here’s a look at what happened and the ongoing fallout: