Sir Keir has been coming under mounting presser from his members and backbench MPs after flailing in the polls. Recent surveys have put the Tories ahead of Labour despite more than 100,000 people dying due to the coronavirus pandemic.

MPs and supporters have become frustrated the Labour leader has not been more critical of Boris Johnson’s handling of the crisis.

Yesterday one of the men who helped guide Sir Keir’s leadership bid last year accused him of failing to have made an impact nearly 12 months into the job.

Tom Kibasi said: “If Starmer were to depart as leader tomorrow, he would not leave a trace of a meaningful political project in his wake.”

In an attempt to regain momentum, Sir Keir is setting out how Labour would lead the recovery from Covid. 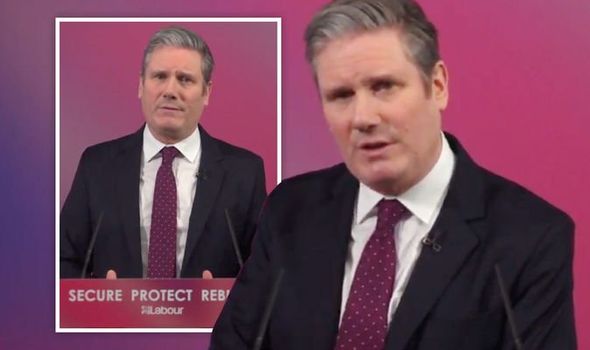 In an attempt to woo voters and members he will say: “Under my leadership, Labour’s priority will always be financial responsibility.

“I know the value of people’s hard-earned money – I take that incredibly seriously – and I know that people rightly expect the Government to look after it too.”

Channelling the message of former Labour leader Clement Attlee he says people are “looking for more from their Government”, as they did in the years after the Second World War.

His speech has already been met with criticism from some Remainers for failing to focus on Brexit.

Former Labour minister Lord Adonis said on Twitter: “Not a single mention of Brexit and its damaging impacts in the pre-briefing for the Labour leader’s speech today.

10.05am update: Anneliese Dodds demands Budget focus on the future

Ahead of Sir Keir Starmer’s speech, Shadow Chancellor of the Exchequer Anneliese Dodds has said a “lack of resilience” in public services before the coronavirus crisis contributed to the economic damage caused by the pandemic.

She said: “We need to not just be fixing immediate problems, and by the way there are many of them.

“The Chancellor needs to be looking forward to the future and Keir will be saying to the chancellor ‘please, set out now those jobs for the future’, jobs that are desperately needed.

“I do believe that we were lacking in that resilience in our public services when we entered this crisis but we also have very strong evidence.”