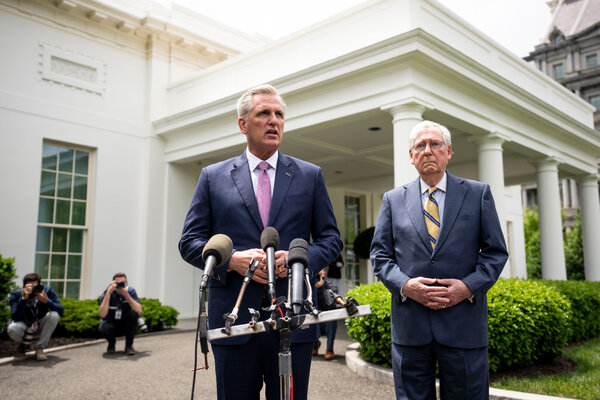 Representative Kevin McCarthy of California, the House Republican leader, suggested on Wednesday that members of his party recognized that President Biden had been legitimately elected, four months after he and 146 other Republicans voted to overturn the election results.

“I don’t think anybody is questioning the legitimacy of the presidential election,” Mr. McCarthy told reporters after meeting with Mr. Biden and congressional leaders at the White House to discuss infrastructure spending. “I think that is all over with. We’re sitting here with the president today. So from that point of view, I don’t think that’s a problem.”

In reality, numerous Republican lawmakers continue to question the legitimacy of the presidential election, in lock step with former President Donald J. Trump. Hours before Mr. McCarthy made his comments, he joined other House Republicans in voting to oust Representative Liz Cheney of Wyoming from her leadership position for repudiating the former president’s election lies and denouncing the lawmakers who encouraged them.

Ms. Cheney’s likely replacement, Representative Elise Stefanik of New York, recently claimed that election officials had engaged in “unprecedented, unconstitutional overreach” last year and expressed support for a Republican-led audit of the 2020 election results in Arizona, part of a continued effort to cast doubt on Mr. Biden’s victory there.

Other congressional Republicans, including Representatives Matt Gaetz of Florida and Marjorie Taylor Greene of Georgia, have also endorsed the Arizona audit, and the lie that the election was stolen has fueled a barrage of restrictive voting bills across the country.

In January, 147 Republican lawmakers voted against certifying Mr. Biden’s victory. When asked point-blank whether they believed Mr. Biden won the election legitimately, they rarely give a straight answer. And the few who have spoken out against efforts to delegitimize the election, or who have publicly criticized Mr. Trump’s actions related to the election — such as Senator Mitt Romney of Utah, Representative Adam Kinzinger of Illinois and Representative Anthony Gonzalez of Ohio — have been rebuked.

Addressing her fellow Republicans before they voted to oust her Wednesday morning, Ms. Cheney said that they should not “let the former president drag us backward,” and that if they wanted a leader who would “enable and spread his destructive lies,” they should vote to remove her.

They responded with jeers.