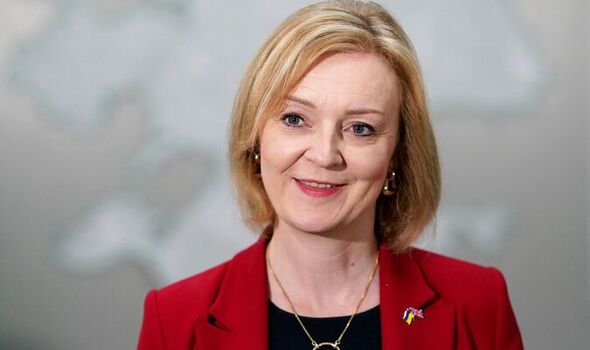 The Tory leadership frontrunner pledged to deliver the planned Northern Powerhouse Rail project that was dramatically scaled back by Boris Johnson nine months ago. The plans include a high-speed coast-to-coast route linking Liverpool and Hull as well as better local services across the North.

She promised to find the extra £26billion needed for a “full fat” modernisation of the network rather than the watered-down version currently planned.

Her supporters see the move as her strongest signal yet of her determination to hang on to the so-called “Red Wall” northern seats captured by the Tories from Labour at the last general election.

But the Foreign Secretary also ruled out reviving the £32billion eastern spur of the HS2 rail project dumped by Downing Street.

Ms Truss revealed her plans for the rail system during a visit to Leeds yesterday ahead of last night’s first hustings event for Tory grassroots members in the leadership contest.

Speaking to reporters in the West Yorkshire city, Ms Truss said: “I grew up in Leeds, I know how poor the transport is and frankly, it’s not got much better since I was a teenager getting the bus into Leeds city centre.

“What I want to see is really fantastic rail services, better roads so people are able to get into work.

“I also want to stop militant action by the trade unions, so that hard-working people who do the right thing can get into work, set up businesses and help grow our economy.”

Asked how she would afford the scheme given the £30billion tax cuts she has pledged, Ms Truss said: “The taxes that I am cutting are affordable within our budget.

“What I am setting out is a plan for economic growth.

“The fact is we’ve had too low growth now for decades and by creating new low tax investment zones in places like West Yorkshire, by enabling the post-Brexit reforms to take place, unleashing more investment from the city, we will grow the economy faster – that will bring in more tax revenue, and that will enable us to afford those projects.

“I also think the funding formula has been unfair on places like Leeds and places like Yorkshire so I will fix the Treasury funding formula to make sure that this part of the country is getting a fairer share of Government resources because frankly, transport is much better in London and the South East than it is here in Leeds, and I will fix that.”

Ms Truss said she would not commit to restoring plans for the HS2 line to Leeds.

“What I’m committing to today is Northern Powerhouse Rail. I grew up in Leeds, I know how poor the local transport is.

“What people need is good routes to commute into work. That is where there is a real issue for people getting into work around West Yorkshire.”

But she added: “I’m not going to commit to restoring that leg of HS2.

She added: “I have committed to Northern Powerhouse Rail going ahead, and I will immediately, upon becoming Prime Minister, work with my new Transport Secretary, bring all the local groups together – the councils, the mayor, the MPs to create the plan to move forward with this really import project, but I’m clear it is absolutely crucial for the future of the north of England.”

Asked whether Rishi Sunak was as committed to the project, Ms Truss said: “The thing about me is I’m prepared to take on the Whitehall orthodoxy, I’m prepared to challenge the groupthink that has, over decades, not put enough investment into this part of the country.

“I’m the person who can challenge Whitehall to get on with it and really deliver over the next decade.”

Mr Sunak has stopped sort of a commitment to bring back the original plans for Northern Powerhouse Rail.

The former Chancellor is said to have been behind the scaling-back of plans for what was a flagship transport project last year.

Ms Truss’s decision to support the original plan earned her the backing of former minister Jake Berry, the chairman of the influential Northern Research Group of Tory MPs, in the leadership contest.

He said: “I’m backing Liz because she’s the person with energy to bring action and delivery to make sure you level up our United Kingdom.

“I’ve met a lot because we spent time talking about how we transform people’s lives, not just in this great city in Leeds, but across the world.

“That’s why I’m proud to be backing Liz Truss to be the next prime minister.”

The Government faced widespread criticism that month on announcing the scheme was being scaled back. Its budget was slashed by £24.9billion and replaced with a promise to upgrade the existing network.

Henri Murison, the chief executive of the Northern Powerhouse Partnership, said: “The outgoing prime minister broke his promises to the north when he published the integrated rail plan.”

Welcoming Ms Truss’s commitment to reversing the cuts to the project, he said: “This would bring back Government support for this vision of a single travel-to-work area across the Pennines, driving up productivity to secure growth for UK plc.”