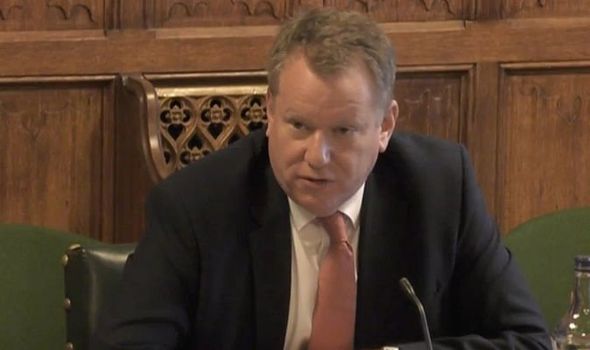 The Brexit minister said the current situation with the EU could not go on forever and a resolution to the frictions caused by the Northern Ireland Protocol was urgently needed.

He said if negotiations failed to break the impasse, the UK would need to use the legal route to suspend the implementation of parts of the treaty.

Hinting a decision on Article 16 would be made in the next few weeks, he said talks would not continue into the winter.

Lord Frost told MPs on the European Scrutiny Committee: “We all see this as an issue for this autumn, to be settled one way or the other.”

The former negotiator of the Brexit withdrawal agreement and EU trade deal added he would rather avoid taking the nuclear option if at all possible but Brussels would have to shift in their negotiating stance if a long-term solution was to be found for the problems caused by the Protocol.

He said: “It would be much better for stability, prosperity and certainty for everybody in Northern Ireland if we could reach an ambitious agreement with the EU that dealt with the problem because then we could move on and everyone would know where they stand.

“I’m still focusing on that.

“As we have said, we think the test for using Article 16 is passed but we would still like to come to an agreed arrangement if we can, and that is what we are trying to do.”

The UK and EU are currently in “intense” negotiations over the implementation of the Northern Ireland Protocol.

In July Lord Frost published a series of proposals for changes to be made to the international agreement to overcome many of the frustrations it caused.

The European Commission published their own suggestions earlier this month.

The Brexit minister said the UK Government welcomed aspects of the European Commission’s proposals to reform the Northern Ireland Protocol but argued some of the ideas put forward were “problematic”.

He praised the Commission for being more flexible in its approach than it had been previously but warned their failure to be willing to remove the role of the European Court of Justice was unacceptable.

The Conservative peer added: “The problem with them is that they don’t go far enough.

“I’m not sure they would quite deliver the kind of ambitious freeing-up of trade between Great Britain and Northern Ireland that we want to see, but what we’re trying to test is whether they could find the basis to go further than what they have put on the table.

“That’s the kind of discussions we have been having and it has been quite constructive so far, but the gaps between us remain significant, and there is a lot of working through to go.”

New rules for MPs proposed in wake of lobbying scandal