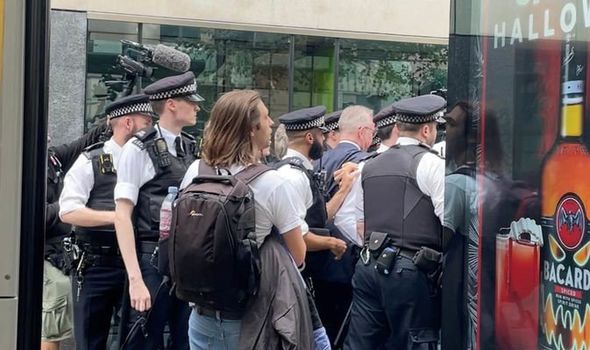 The startling scene comes just four days after Sir David Amess MP was fatally stabbed at a constituency surgery. Yesterday Mr Gove, who is the Communities Secretary, looked bewildered as he was ambushed in the street.

Disturbing footage shared on social media showed one protester shouting in Mr Gove’s face while others hurled a torrent of ­foul-mouthed abuse. At one point a piece of paper thrown at him appeared to hit his face.

The march was organised by Official Voice and GB Resistance against lockdowns and the Covid vaccines.

Met Police officers formed a protective ring around the Tory MP and got him safely into a building. A spokesman said: “Our officers were immediately on scene. There were no arrests. We know there is footage circulating online of this incident, we will review this and our officers’ body-worn video to see if any offences occurred.”

No 10 said the protest was “completely unacceptable” and the Prime Minister’s spokesman said: “We expect the police to take this kind of behaviour seriously.”