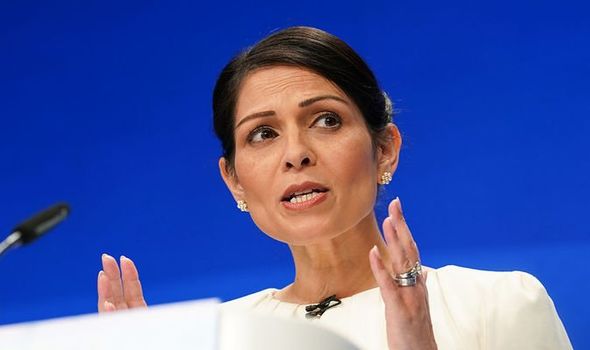 The Home Secretary faced claims at the weekend that senior levels of government are concerned over her handling of the situation.

She was also locked out of emergency talks with European ministers after a diplomatic spat between the Prime Minister and French President Emmanuel Macron.

Allies of Ms Patel said they were “annoyed” by the concerns, with one adding: “Priti is the only person with a plan. People piling in with anonymous briefings are on another planet.”

Some 27 suspected migrants were killed crossing the Channel in a boating disaster on Wednesday.

Among the dead were children and a pregnant woman. It was the highest death toll on record in the current crisis.

Ms Patel will telephone European ministers directly to seek support to stop the dangerous crossings after France banned her from the crisis talks yesterday.

Her invitation was withdrawn when President Macron took offence after Mr Johnson publicly shared a letter he had written to the French premier on how to deal with the issue.

The Home Secretary and Dutch counterpart Ankie Broekers-Knol agreed a tougher coordinated response was needed in a phone call on Sunday morning. She is expected to hold more one to one talks in the coming days.

Ms Patel said: “I held discussions with Ankie Broekers-Knol, my counterpart from the Netherlands, about my proposals to deal with the global migration crisis.

“We agreed more coordinated action was needed. I will continue to press this point with my European counterparts this week.”

Ms Patel said it was “unfortunate” she had been uninvited from the meeting with counterparts during her discussion with Ms Broekers-Knol.

A Home Office account of their talks stated: “They agreed that the tragic incidents of last week demonstrate the need for European partners to work together.

“It was clear that shared problems needed shared solutions. The Home Secretary expressed that it was unfortunate that she wouldn’t be present at today’s meeting of interior ministers in Calais to discuss this issue.

“The Home Secretary and the minister for migration discussed ideas for enhanced bilateral and EU co-operation, including the need to tackle the criminal gangs that are orchestrating these deadly journeys through shared intelligence and joint law enforcement initiatives.

“Both agreed that return agreements are essential for breaking the criminal business model.”

Ministers from Germany, the Netherlands, Belgium and France had met in Calais along with EU officials, the bloc’s border agency Frontex and police agency Europol.

The talks were arranged to find a way to stop the people smuggling gangs that charge migrants thousands of pounds to make the crossing.

Gerald Darmanin, France’s interior minister, said the “problem of networks goes beyond our borders” and the ministers were trying to find “common solutions”.

Mr Darmanin insisted France does want to work with Britain on the issue, despite snubbing Ms Patel.

He said: “I would have liked the British to be here today. I’ve had an intense exchange with my British counterpart.

“This meeting was not anti-English, it was pro-European. We want to work with our British allies and friends.”

Mr Darmanin said the UK must take responsibility and limit how attractive it is to people wanting to cross the Channel.

The Government wants to start UK-France patrols by border officials along French beaches to stop boats leaving. It also said an agreement on returning migrants to France is needed as it could have “an immediate and significant impact” on the flow of people attempting the crossing.

Mr Johnson has also called for greater use of technology, such as drones, to track migrants and people-trafficking gangs.

Health Secretary Sajid Javid said the Channel crisis would only be solved if France and the UK worked together.

He said: “What happened in the Channel last week is a tragedy and the criminal enterprises that are responsible for taking advantage of these vulnerable people, this is the business model that we need to break and that does require France and the UK working together.”

Mr Javid said the PM was right to set out areas where the two nations could cooperate more. He said: “In terms of returns, if someone that arrived here, and was rejected in terms of an asylum claim and returned to France, that would really break the back of this business.”