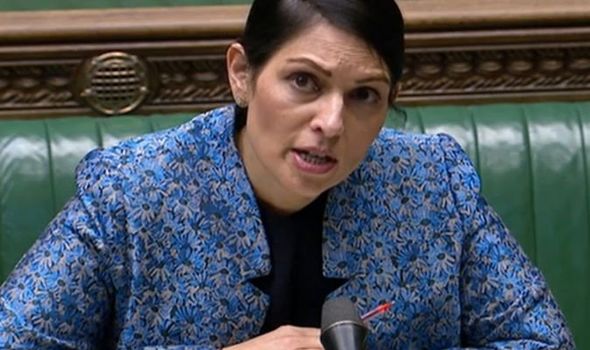 MPs voted by 366 to 265 to adopt the Nationality and Borders Bill at its second reading.

It will undergo further scrutiny at a later date.

The Home Secretary believes the new legislation will help put a stop to migrants making the dangerous crossing across the English Channel from France on a daily basis.

Yesterday at least 430 people, including women and young children, made the journey, a new record for a single day.

More than 8,000 migrants are thought to have succeeded in crossing the Channel so far in 2021.

Migrants crossing the Channel this year has already nearly surpassed the total for the whole of 2020.

The Nationality and Borders Bill aims to make it fairer and easier for genuine asylum seekers to make applications abroad, crackdown on criminal human trafficking networks and remove those from the UK with no right to be here.

Opening the debate on the Bill in the Commons yesterday, Ms Patel said: “The British people have had enough of open borders and uncontrolled migration.

“Enough of a failed asylum system that costs the taxpayer over a billion pounds a year, enough of dinghies arriving illegally on our shores, directed by organised crime gangs, enough of people drowning on these dangerous, illegal, and unnecessary journeys.”

She added: “The British people have repeatedly voted to take back control of our borders.

“They finally have a Government that is listening to them.

“For the first time in decades we will determine who comes in and out of our country.”