Democrats at every level of the party are increasingly seeking to reclaim language about freedom and personal liberty from Republicans, as part of their midterms messaging.

This article is part of our Midterms 2022 Daily Briefing 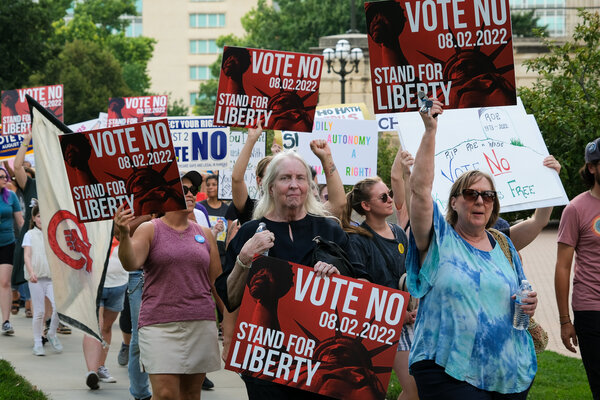 For much of the midterm campaign, Democrats have grappled with how to define their message, weighing slogans like “Democrats deliver” and “Build back better,” and issuing warnings against “ultra-MAGA” Republicans.

Now, a coalition of progressive organizations has settled on what its leaders hope will be a unified pitch from the left. This November, they plan to argue, Americans must vote to protect the fundamental freedoms that “Trump Republicans” are trying to take away.

That pitch is the product of a monthslong midterms messaging project called the “Protect Our Freedoms” initiative, fueled by polling and ad testing.

The move is the latest evidence that Democrats at every level of the party and of varying ideological stripes — including President Biden, abortion rights activists in Kansas and, now, a constellation of left-leaning groups — are increasingly seeking to reclaim language about freedom and personal liberty from Republicans. It is a dynamic that grew out of the overturning of Roe v. Wade in June, and one that is intensifying as more states navigate abortion bans while Republicans nominate election deniers for high office.

The messaging project is a sprawling effort from progressive groups, activists and strategists aimed at getting Democrats on the same page, as they seek to crystallize the choice between the two parties and emphasize the consequential nature of the midterm elections.

“Freedom is a powerful frame for this election, to make clear what the stakes are,” said Jenifer Fernandez Ancona, an architect of the messaging project as well as a co-founder and vice president of Way to Win, a collective of left-leaning Democratic donors and political strategists.

What is most striking about the initiative is not the initial size of the investment — there is a $5 million national paid-media component associated with the campaign, a relatively modest sum — but the fact that left-wing organizations are now embracing language that has been more closely associated with small-government-minded conservatives.

“For far too long, we’ve witnessed how the right wing has masterfully sort of owned and captured the language of freedom,” said Maurice Mitchell, the national director of the Working Families Party, one of the organizations involved in the “Protect Our Freedoms” effort.

Such language has never been limited to the right: former President Franklin D. Roosevelt famously promoted the “Four Freedoms,” for instance, and a major campaign for marriage equality was framed as Freedom to Marry. But Republicans have long cast their party as the bastion of freedom — whether as the defender of free markets or more recently, in opposition to coronavirus-related mandates.

In a statement, Emma Vaughn, a spokeswoman for the Republican National Committee, highlighted the effort to paint Democrats as anti-freedom over pandemic measures, calling them the party of “shuttered businesses, school lockdowns, masks on toddlers and forced vaccines.”

Ads that draw from the “Protect Our Freedoms” messaging argue that core American values — such as free elections in which the will of the people is upheld, or freedom for individuals to make decisions for their families — are now uniquely jeopardized. Just last week, a group of academics issued stark warnings to Mr. Biden about the state of democracy, The Washington Post reported.

“We’ve seen what happens when Trump Republicans have claimed to be for freedom, only to take it away and impose their will,” says an ad paid for by Way to Win Action Fund, as images from the Jan. 6, 2021, attack on the U.S. Capitol flash across the screen. “This November, remember: You’re a part of the fight for freedom.”

Ms. Fernandez Ancona said the national ad campaign offers “the example of the message that we’re trying to put forward,” one that leaders of the initiative hope will be echoed in grass-roots efforts and advertising from individual organizations.

MoveOn Political Action is planning a television and digital ad buy for later this month, aimed at statewide races in Arizona and Pennsylvania, that will incorporate “Protect Our Freedoms” messaging, said Rahna Epting, the executive director of MoveOn. And officials with several organizations said the messaging lessons will mold how they engage voters at their doors or on the phone.

Ten organizations were involved in the “Protect Our Freedoms” messaging initiative, including Indivisible and Future Forward.

Within the broader Democratic ecosystem, candidates and party institutions are still pursuing a broad range of messaging tactics.

But in an interview last week after Kansas voters defeated an anti-abortion measure, Representative Sean Patrick Maloney, the chair of the House Democratic campaign arm, also reached for the “freedom” language as he described the choice between the two political parties.

“The MAGA movement will take away your rights, your benefits, your freedoms, and you have to vote Democratic if you care about those things,” he said.

Research assembled by the “Protect Our Freedoms” campaign helps explain why Democrats see such messaging as potent: A data point cited in a campaign presentation said that 42 percent of individuals, when asked in a survey to identify the values that mattered most to them as Americans, picked “freedom and liberty,” far outpacing other options like equality and and patriotism.

The presentation also said that the overturning of Roe v. Wade had opened a “persuasion window,” putting more voters into play. Anat Shenker-Osorio, a progressive consultant involved in the messaging project, said there was a powerful opening to tie “actions on Roe and on abortion to this broader framework of taking away our freedoms.”

“People need to understand that they’re going to lose things if this Republican Party wins,” she added.