WASHINGTON — The conclusion of the impeachment trial of Donald J. Trump was thrown into doubt on Saturday after the Senate voted to allow witnesses to be called, amid a last-minute push by House prosecutors to subpoena testimony and documents to reveal what the former president was doing as the Jan. 6 assault on the Capitol unfolded.

The surprise move to open the trial record came on a day when the Senate had been on track to hand Mr. Trump his second impeachment acquittal, and it threatened to prolong a proceeding that members of both parties have been eager to finish. It came just after the top Senate Republican, Mitch McConnell of Kentucky, had privately told his colleagues he was ready to acquit Mr. Trump, confirming that a conviction was exceedingly unlikely.

Still, the Democratic managers, who had been prepared to forgo witnesses altogether and move to a verdict on Saturday, said they had a change of heart after reading a new account by Representative Jaime Herrera Beutler, one of the 10 Republicans who voted to impeach Mr. Trump. In a statement late Friday night, Ms. Herrera Beutler said that Representative Kevin McCarthy, Republican of California and the minority leader, had told her that when he called Mr. Trump on Jan. 6 to beg him to call off the mob that had stormed the Capitol, Mr. Trump had sided with the rioters.

“Well, Kevin, I guess these people are more upset about the election than you are,” Mr. Trump is said to have told Mr. McCarthy, according to Ms. Herrera Beutler’s account.

Representative Jamie Raskin, Democrat of Maryland and the lead manager, said he and his team of prosecutors wanted a chance to subpoena Ms. Herrera Beutler, of Washington, for a brief deposition and a copy of contemporaneous notes memorializing the conversation.

“Needless to say, this is an additional critical piece of corroborating evidence, further confirming the charges before you, as well as the president’s willful dereliction of duty as commander in chief of the United States, his state of mind and his further incitement of the insurrection on Jan. 6,” Mr. Raskin said.

Mr. Trump’s lawyers angrily protested. In an attempt to sway senators from a potentially protracted and painful delay, Michael T. van der Veen said that if the managers were able to depose Ms. Herrera Beutler, he would need “at least over 100 depositions” including from Speaker Nancy Pelosi and other top Democrats to do “a thorough investigation that they did not do.”

It was a rare moment of unpredictability in a trial that has otherwise appeared preordained. A resolution to the standoff was unclear late Saturday morning. The Senate had voted 55 to 45 to agree in general terms to consider witnesses, with five Republicans — Senators Susan Collins of Maine, Lindsey Graham of South Carolina, Lisa Murkowski of Alaska, Mitt Romney of Utah and Ben Sasse of Nebraska — joining Democrats. Senators would have to take additional votes to actually subpoena individual witnesses or items of evidence, and their leaders paused the trial to try to determine a path forward. 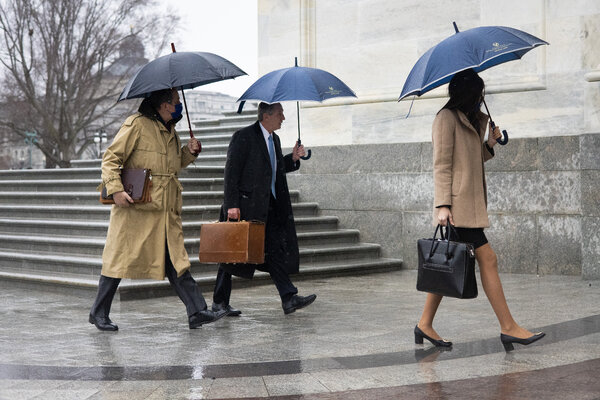 Senators in both parties appeared caught between a desire to conclude the all-consuming trial as quickly as possible and a desire to ensure fairness should witnesses ultimately be called. Agreeing to depositions could delay a verdict by days or weeks at a time when both parties want to move on and doubt whether additional information — particularly a secondhand account like Ms. Herrera Beutler’s — would alter the former president’s likely acquittal.

What You Need to Know