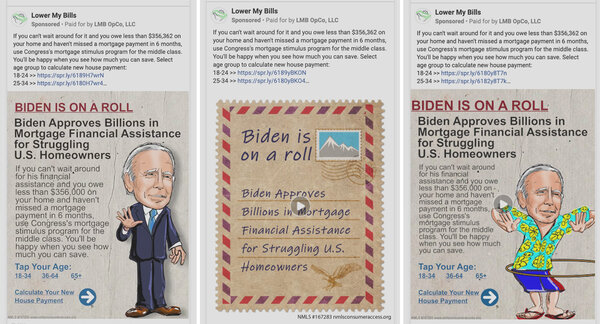 The single biggest advertiser in Facebook’s political advertising database in recent months is not President Biden, the Democratic or Republican parties or even any of the hundreds of candidates angling for advantage in the 2022 midterms.

Instead, it is an obscure mortgage-related firm, Lower My Bills, which in an earlier internet era was best known for its omnipresent — if ostentatious — banner ads featuring dogs in goggles, dancing cowboys and strange green aliens that had little to do with interest rates.

Now, the firm is spending millions of dollars on ads featuring headlines like “Biden is on a roll” as it pursues clicks it can convert into new customers. Some of the ads feature an animated likeness of Mr. Biden in a suit; others have the president in flip-flops and a Hawaiian shirt while hula hooping on the beach.

The spending is significant. Over the past 90 days, Lower My Bills has spent more than $10 million on Facebook ads; that’s more than double the sum of the Republican National Committee, the Democratic National Committee and the House and Senate arms of the two parties combined during the same period.

“The shocking thing about it is the scale,” said Kenneth Pennington, a Democratic digital strategist. “The only reason you spend $11 million on Facebook is if you’re making at least $12 million.”