Thousands of supporters of President Trump protesting the outcome of the election rallied in Washington on Saturday, earning a brief drive-by visit from the president himself, in a day of orderly demonstrations that devolved into violence as the night wore on.

The police made 20 arrests, including four on gun charges, as counterprotesters and Trump supporters clashed in the streets throughout the evening. One person was stabbed, but his condition was unknown late Saturday.

For most of the day, however, the crowds were under control, if boisterous, and many greeted the president with applause and cheers when he passed by in his motorcade, waving through the window as he headed to his private golf club in Sterling, Va.

By early afternoon, demonstrators had fanned out for several blocks around Freedom Plaza.

On Twitter, the White House press secretary, Kayleigh McEnany, offered an exaggerated assessment of the event, called the Million MAGA March, claiming that a million supporters had turned out.

Accounts on the ground suggested that her estimate was wildly inflated.

“It’s not like the Fourth of July or anything,” said a police officer who was stationed near Freedom Plaza at 13th and G Streets. He declined to give his name because he was not authorized to speak to the news media. “But yeah,” he added, “there’s a crowd down there.”

Even if short on numbers, the crowd was not lacking in enthusiasm for the president or outrage over the grievances he has raised over the past four years.

Zenaida Ochoa, 46, a Virginia resident originally from Arizona, said she had been “following Trump since I was a kid.”

“He’s not perfect,” said Ms. Ochoa, who added that she supported Mr. Trump partly because of his immigration policies.

Mr. Trump’s brief visit on Saturday came one day after the last two states of the election were called. President-elect Joseph R. Biden Jr. won Georgia to finish with a total of 306 electoral votes — the same number that Mr. Trump won in 2016 and called a landslide — and Mr. Trump won North Carolina, for a total of 232 electoral votes.

Mr. Trump has refused to concede the race to Mr. Biden, and he continues to falsely insist he would have won if not for what he has claimed were widespread voter irregularities. (In fact, top election officials across the country have said that there is no evidence that fraud or other irregularities played a role in the outcome.)

In addition to the Million MAGA March, demonstrations of the Trump faithful in Washington on Saturday included a Stop the Steal rally and a Women for Trump event.

Supporters of the president traveled from across the country to participate.

“I’m blown away,” said Rachel Williams, a county worker from Jasper, Ala., who got in a car with three friends at 5:30 Friday morning to attend the march in Washington. “I’m encouraged that America is not going to just lie down.”

Ms. Williams said there had been no fraud in her county — she registers voters as part of her job — but voiced suspicion over the election results and suggested that there might have been fraud elsewhere. A group of federal, state and local election officials declared flatly this week that the election “was the most secure in American history” and that there was “no evidence” any voting systems had been compromised.

By about noon, demonstrators began marching toward the Capitol, streaming down Pennsylvania Avenue for over an hour, and rallying again in the area around the Capitol building and outside the Supreme Court.

“We want Trump to know that we love everything that he did, especially for Hispanic people,” said Anthony Cabassa, 33, who was clutching a flag that read “Defiant.”

“He woke us up,” said Mr. Cabassa, who had flown in from Los Angeles. “Whether you were on the left or on the right, he woke a lot of people up.”

Later in the day, as many Trump supporters began trickling toward Union Station, more than 40 men who identified themselves as members of the Proud Boys, an extremist organization, began to march back toward Freedom Plaza.

The men, dressed in yellow and black, pumped their fists in the air and chanted “Trump 2020.” Some wore ballistic vests. 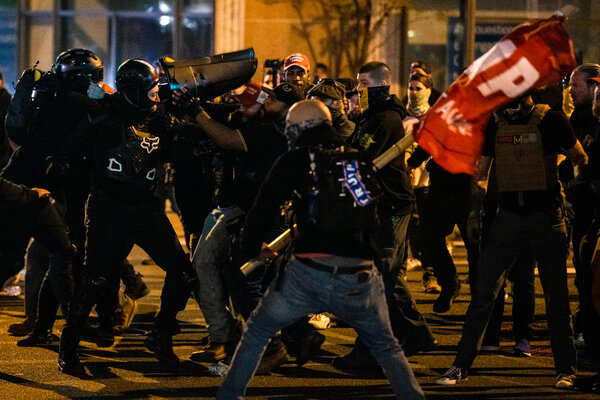 A few skirmishes broke out in the afternoon among Trump supporters and counterprotesters critical of the administration.

On 12th Street and Pennsylvania Avenue, tensions flared between a crowd of Trump supporters criticizing antifa and a smaller group of counterprotesters, including a mother and a child.

As the night unfolded, videos on social media showed fistfights breaking out, the police trying to keep the groups apart by forming barricades with their bikes, and protesters massing near Freedom Plaza, where people lit small fires.

In the evening, at the P.J. Clarke’s restaurant near the White House, counterprotesters threw bottles and fireworks at a group of Trump supporters, a USA Today reporter said.

Shortly before 9 p.m., a group of Trump supporters outside a hotel less than a mile from the White House said an altercation had broken out between Trump supporters and others they described as antifa. News reports indicated that a man had been stabbed, and the police officers on site shortly after the incident said they could not confirm how severe the injuries were.

Some Trump supporters, standing outside the Embassy Suites Hotel, said the two groups had converged on the corner of 10th Street and New York Avenue in Northwest Washington.

They said the melee had broken up quickly after the police intervened.

“You could feel the intensity,” said Damien Courtney, 24, a Trump supporter from Tennessee. “It was nerve-racking.”