WASHINGTON (Reuters) – Thousands of protesters marched in Washington on Saturday as rallies across the United States to protest the killing of a black man in Minneapolis police custody enter a 12th day and officials move to rein in law enforcement tactics.

George Floyd, 46, died on May 25 in Minneapolis after a police officer knelt on his neck for nearly nine minutes. The killing has triggered protests against racism and police brutality in cities and smaller communities nationwide, as well as demonstrations by supporters around the world.

Some activists have called on social media for a million people to attend Saturday’s rally in the U.S. capital. Local media has predicted tens of thousands will attend.

On the steps of the Lincoln Memorial, Delonno Carroll, a 27-year-old construction worker, said he had come out to demonstrate because he “simply cannot” sit and watch from home.

“Our voices need to be heard,” Carroll said. “No longer can we have a man call out for his mom on the streets and have to go through what George Floyd did.”

Police — who drew criticism for firing smoke grenades and chemical irritant “pepper balls” before charging into peaceful protesters near the White House on Tuesday — were out in smaller numbers around the marchers on Saturday afternoon and generally in a more relaxed posture, wearing patrol uniforms rather than body armor and helmets.

By noon, about 3,000 demonstrators had gathered at the Lincoln Memorial and about the same number were near the White House, DC police reported. Another group of protesters was in front of the U.S. Capitol.

Some passing motorists honked their horns in support, and some city residents came out on the street to hand out water and snacks to offer protesters relief from the sweltering heat.

Hundreds of demonstrators who marched past the George Washington University Hospital chanted “Hands up, Don’t shoot!” “We March for hope, not for hate,” and “I can’t breathe!”

That last chant echoed protests from New York in 2014, when Eric Garner died in police custody after an officer used a banned chokehold on him. Garner and Floyd are part of a long line of black men and women killed by white officers.

Footage of Floyd’s death recorded by an onlooker showed the man repeatedly pleading for his life and telling the officers he could not breathe, before he went silent.

A second memorial service was held for Floyd on Saturday in North Carolina, where he was born. Hundreds lined up at a church in Raeford to pay their respects during a public viewing, and a private service for the family was scheduled for later in the day.

Thousands took to the streets across Europe and Australia, as did hundreds in Tokyo and Seoul, in support of U.S. protests against police brutality.

Marches and rallies took place on Friday in Atlanta, Los Angeles, Minneapolis, Miami, New York and Denver, among other places. The night-time protests were largely peaceful but tension remains high even as authorities in several places take steps to reform police procedures. 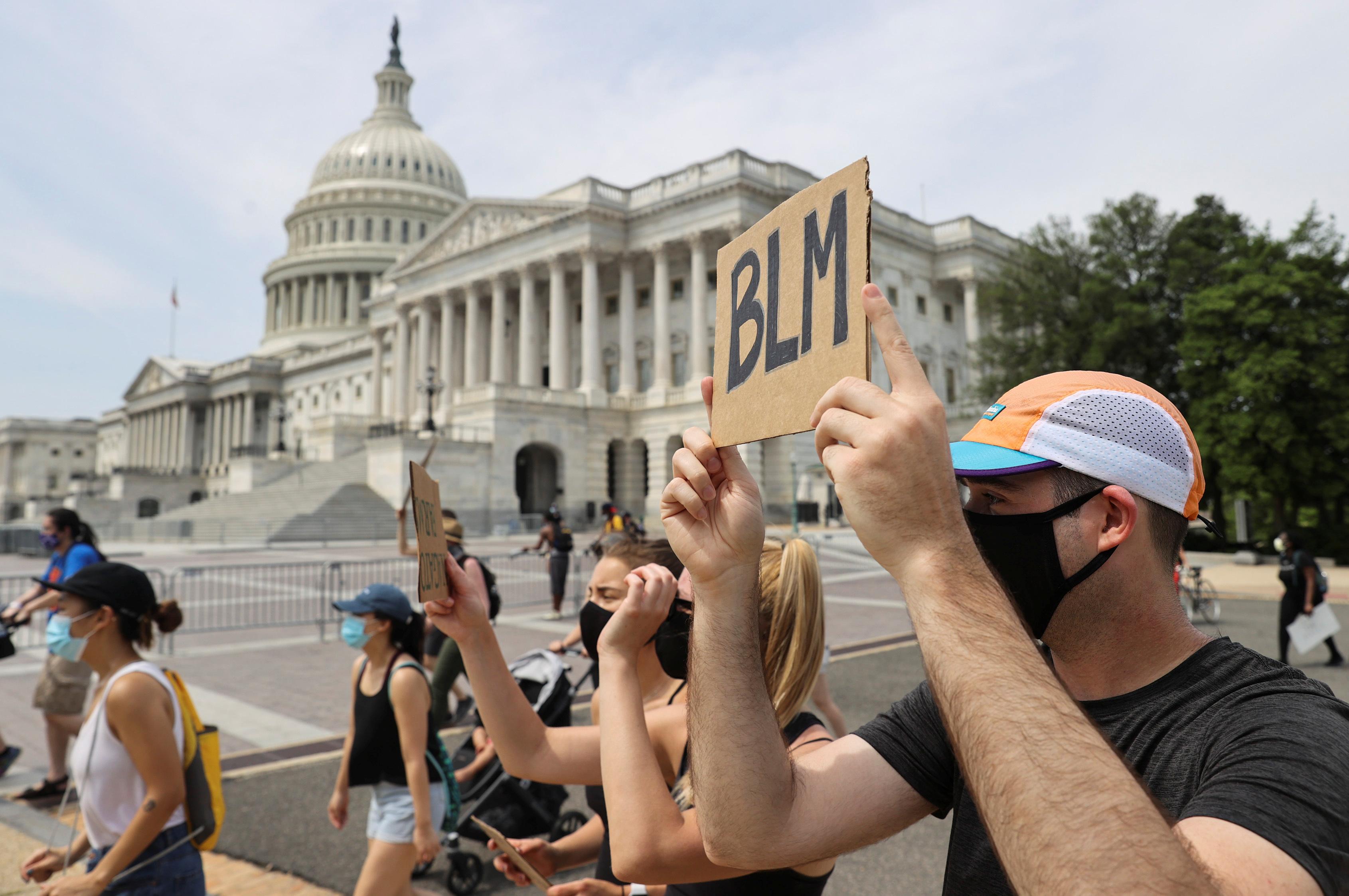 A federal judge in Denver ordered city police to stop using tear gas, plastic bullets and other “less-than-lethal” devices such as flash grenades, with his ruling citing examples of protesters and journalists being injured by police.

“These are peaceful demonstrators, journalists, and medics who have been targeted with extreme tactics meant to suppress riots, not to suppress demonstrations,” U.S. District Judge R. Brooke Jackson wrote in the ruling.

In Minneapolis, Democratic city leaders voted to end the use of knee restraints and choke holds, while California’s Democratic governor, Gavin Newsom, said he would end state police training of restraints that restrict the carotid artery in the neck.

Black Lives Matter activists have called for cities to defund police departments. Los Angeles Mayor Eric Garcetti, a Democrat who in April proposed increasing law enforcement funding, this week reversed course and said he would seek some $150 million in cuts to the Los Angeles Police Department.

In a case from New York state that drew condemnation after two police officers were filmed shoving a 75-year-old protester to the ground in Buffalo, the two officers were arraigned on second-degree felony assault charges on Saturday.

The officers, who were supported outside the court house by hundreds of law enforcement colleagues, pleaded not guilty during a virtual arraignment, according to a spokeswoman for the local district attorney’s office. 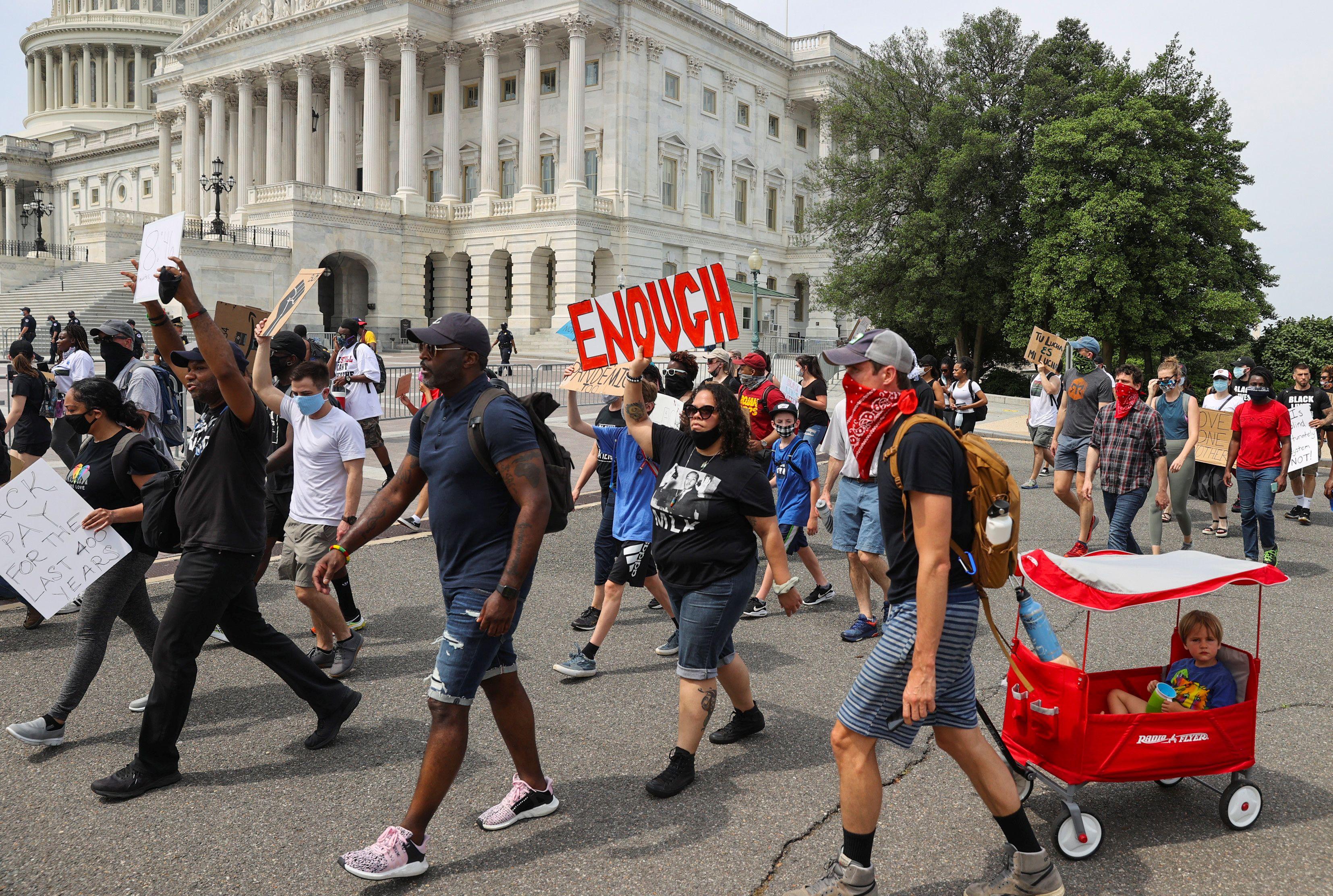 The victim was treated for a head injury, loss of consciousness and bleeding from the right ear, authorities said, and remains hospitalized in critical condition.

The demonstrations have erupted as the American public and businesses struggle to recover from sweeping lockdowns imposed to stop the spread of the novel coronavirus. Disease experts have said the protests could spark new outbreaks.