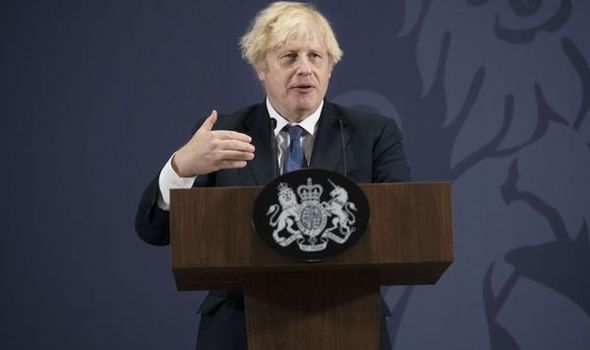 But instead of celebrating, the Prime Minister – who must quarantine until Monday after being “pinged” – will be working. Sources say he is determined to make sure the UK comes out of the pandemic “stronger than ever before”.

Charting a course through the minefield of the current “pingdemic”, the backlash over Covid passports and solving the social care crisis are said to be among his “top priorities”.

His two-year premiership has been far from predictable, from the soaring highs of securing Brexit and a landslide election victory to the lows of the coronavirus pandemic, which also left him in intensive care.

In a tumultuous first year in the job Mr Johnson set about securing a Brexit deal with Brussels. He duly did this in October 2019, but not before asking the Queen to prorogue Parliament and then losing an historic Supreme Court challenge to the decision.

Then came the Tories’ impressive General Election victory. Brexit Day was swiftly celebrated on January 31 last year. He then announced his engagement to Carrie Symonds.

As Covid-19 began to take a grip, Mr Johnson placed the UK into lockdown on March 23.

Less than two weeks later he was fighting for his life in an intensive care unit having been struck down with the virus.

After leaving hospital Mr Johnson welcomed the birth of his son, Wilfred.

Amanda Milling, co-chairman of the Conservative Party, said that Mr Johnson’s priorities still remain to deliver the promises of the 2019 General Election.

She said: “We remain committed to the pledges we made to you and our promise to level up every region of our country.”