WASHINGTON — The United States on Thursday carried out an airstrike in eastern Syria against structures belonging to what the Pentagon said were Iran-backed militias responsible for recent attacks against American and allied personnel in Iraq.

The strikes were authorized by President Biden in response to the recent attacks in Iraq and to continuing threats to American and coalition personnel, said John Kirby, the Pentagon press secretary, who spoke with reporters traveling with Defense Secretary Lloyd J. Austin III in California.

A rocket attack on the airport in the northern Iraqi city of Erbil this month killed a civilian contractor with the American-led military coalition and wounded six others, including a U.S. service member and four American contractors.

American officials said the military response was essentially a tiny demonstration strike: one bomb dropped on a small cluster of buildings on the Syria-Iraq border used to transit militia fighters and weaponry in and out of the country.

The strike was just over the border in Syria to avoid diplomatic blowback to the Iraqi government. The Pentagon offered up several larger groups of targets but Mr. Biden approved the smallest option, American officials said.

“This proportionate military response was conducted together with diplomatic measures, including consultation with coalition partners,” Mr. Kirby said. “The operation sends an unambiguous message: President Biden will act to protect American and coalition personnel.” 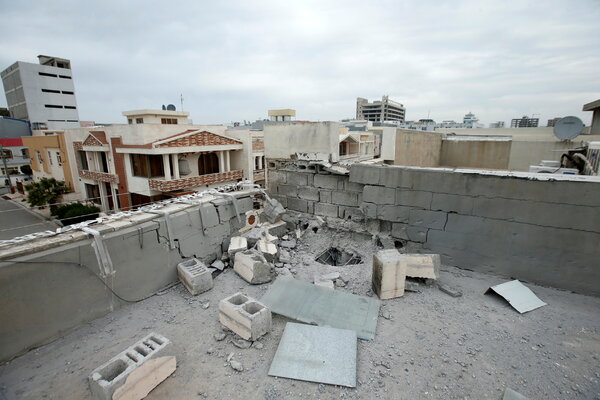 Mr. Kirby said the American retaliation was meant to punish the perpetrators of the rocket attack but not to escalate hostilities with Iran, with which the Biden administration has sought to renew talks on a nuclear deal that President Donald J. Trump had shelved.

“We have acted in a deliberate manner that aims to de-escalate the overall situation in both eastern Syria and Iraq,” Mr. Kirby said.

Mr. Biden authorized the strikes on Thursday morning, as his defense secretary was at a hotel in San Diego, preparing to visit the aircraft carrier Nimitz, which was returning home from the Persian Gulf.

Mr. Austin expressed confidence that the facilities targeted were used by militia groups responsible for the attacks. Speaking to reporters aboard his plane Thursday evening, he said that the Biden administration had been “deliberate” in its approach.

“We allowed and encouraged the Iraqis to investigate and develop intelligence, and it was very helpful to us in refining the target,” he said.

The administration has taken a more measured response to the rocket fusillade in Erbil than Mr. Trump’s pitched campaign against Iran and past actions of its proxies in Iraq — one that often caught the Iraqi government in the crossfire.

Administration officials have said since the Erbil attack that the United States would respond at a time and place of its choosing.

Even so, the deliberateness of the new administration’s approach has raised questions both in Washington and in Baghdad about where Mr. Biden’s red lines are when it comes to responding to attacks from Iran-backed militias that target Americans in Iraq.

Few details of the attack, or of the damage, were available Thursday night.