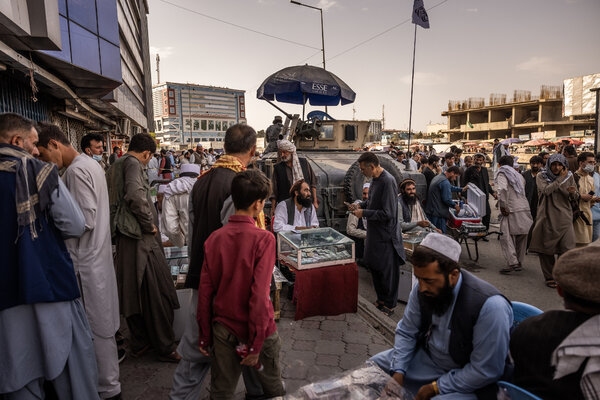 WASHINGTON — America’s war in Afghanistan is over, but the fight over the Taliban’s finances is only beginning.

The fate of billions of dollars of international reserves and foreign aid represents its own set of politically and legally fraught decisions as the world comes to grips with what Afghanistan will look like under Taliban rule. The stakes are extraordinarily high, as millions of Afghans face the prospect of becoming collateral damage from a stranglehold of sanctions on the Taliban that remain in place, threatening to sink an economy that the United States has spent two decades trying to prop up.

With a humanitarian crisis looming, the Biden administration is reviewing how to tailor that web of sanctions so that aid can continue to reach the Afghan people. The challenge is how to let donor money continue to flow without further enriching the Taliban, which the United States considers a terrorist organization. Experts say that such a situation, in which a group deemed to be terrorists takes over an entire country, is without precedent and poses a complex test for the United States’ sanctions program.

“This is a new world,” said Adam M. Smith, a senior sanctions official in the Obama administration’s Treasury Department. “I can’t think of any case in which a terrorist group that’s already designated became the power in charge of a full country.”

He explained that the Treasury Department must soon decide what exceptions, or licenses, it would grant for certain kinds of transactions. It must also determine whether all of Afghanistan, or only the Taliban leadership, remains under sanctions so that the world knows how to engage with the government.

“We need to find a way to encourage goods and services into Afghanistan, or you’re going to have 30 million Afghans having collateral consequences here and that’s going to be disaster,” Mr. Smith said.

As the Taliban swept to power last month, the United States swiftly acted to maintain as much leverage as possible. It blocked its access to $9.5 billion in international reserve funds and pressured the International Monetary Fund to suspend distribution of more than $400 million in currency reserves.