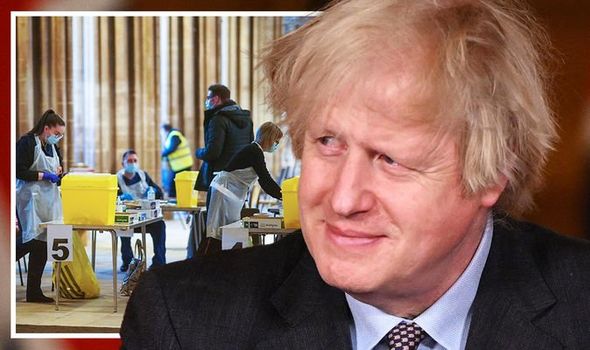 But Britain’s rollout achievement saw 844,285 people receive doses – at a rate of 27 jabs every second. The record-breaking total, which followed more than 700,000 vaccinations just 24 hours earlier, was applauded by Boris Johnson.

The Prime Minister – who had received his first jab on Friday – said: “A huge thank you to everyone involved.” He added: “Please come forward to get your jab when you are invited to do so.”

Meanwhile, Brussels chiefs stepped up their threats to seize UK-bound exports of the life-saving vaccines.

Ben Wallace, the Defence Secretary, attacked the EU’s stance as “counterproductive” and urged the bloc to be “grown-up” as part of a global effort to beat the virus.

He added the EU was “under tremendous political pressure” because of its botched rollout and said “the rest of the world is looking at the Commission about how it conducts itself”. 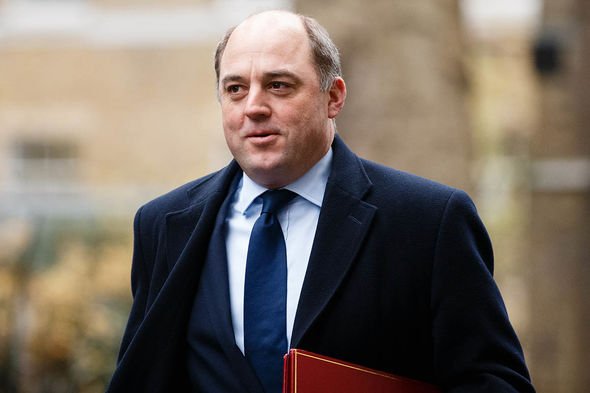 The Health Secretary added: “For the second day running… a new record number of vaccines administered in a single day. This mammoth team effort shows the best of Britain – thank you to the British public for coming forward.”

Dr Emily Lawson, NHS England’s senior responsible officer for vaccine rollout, said: “It is remarkable that because of the sustained hard work of NHS staff and all those involved in delivering jabs up and down the country, the vaccination programme has once again topped its own success with its busiest week.

“I could not be more proud of all those involved.

“We moved on to offering vaccines to those aged 50 and above. We urge anyone in this group to make use of the huge range of sites you can book in to across the country.”

Sir Simon Stevens, NHS chief executive, said: “The speed and precision of the NHS vaccination campaign have been on full display this weekend.

“NHS staff across England administered a remarkable 27 jabs a second. In just one day we vaccinated the equivalent of the entire adult populations of Liverpool, Southampton and Oxford.

“We have a strong supply of vaccine for the coming week too, so if you are aged 50-plus, don’t delay.”

More than half of all adults have had at least one shot, including this man in Green Lanes, north London yesterday.

Ursula von der Leyen, the president of the European Commission, has repeated a threat to use emergency powers to seize vaccines set for export.

She said in an interview on Saturday: “This is a message to AstraZeneca – you fulfil your part of the deal toward Europe before you start to deliver to other countries.” 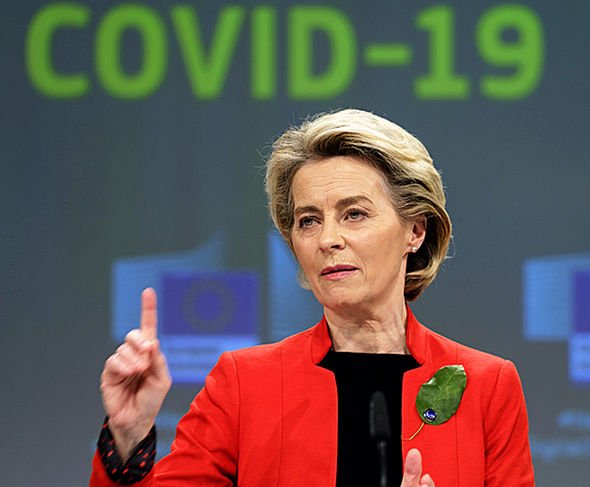 “European citizens are growing angry and upset at the fact that the vaccine rollout has not happened as rapidly as we had anticipated,” she said on BBC One’s The Andrew Marr Show.

“Both the EU and the UK have contracts with AstraZeneca and my understanding is the company is supplying the UK but not the European Union.

“We are supplying the UK with other vaccines, so I think this is just about openness and transparency.”

In response, Mr Wallace warned the manufacture of the Pfizer dose depends on supplies from the UK.

He said: “The grown-up thing would be for the European Commission and some of the European leaders to not indulge in rhetoric but to recognise the obligations that we all have.

“We will all hold each other to our contracts. Making a vaccine is like baking a cake. We all have different ingredients and the European Commission will know that.”

He said earlier, on Sky News’s Sophy Ridge on Sunday, that the EU would suffer “severe reputational” damage if it interfered.

“If contracts and undertakings get broken, that is a very damaging thing to happen for a trading bloc which prides itself on the rule of law. It would be counterproductive because the one thing we know about vaccine production and manufacturing is that it is collaborative.

“If the Commission were to start to do that, I think they would undermine not only their citizens’ chances of having a proper vaccine programme, but also many other countries around the world.

“With the reputational damage to the EU, I think, they would find very hard to change over the short term.”

If the EU stopped Pfizer vaccines reaching the UK, Westminster might respond by preventing Yorkshire-made lipids that are needed for the jab from being exported to Belgium.

Croda International, a chemicals company based in Snaith, in the East Riding of Yorkshire, supplies the vital “fatty molecules” to Pfizer factories in the EU.

Bosses at the drugs giant and its partner BioNTech have told European leaders to back down from their threat of a blockade – or they run the risk of key ingredients being withheld.

Meanwhile, polls showed a huge loss of confidence on the Continent in the Oxford-AstraZeneca jab, as some countries suspended using it.

Most nations have resumed inoculations with that formulation, after fears of blood clots in people who had had the jab were discounted.

People in Germany who considered the AstraZeneca vaccine was safe fell from 55 percent to 32 percent over the last two weeks.

While in France the figure plunged from 61 percent to just 23 percent.

Surveys taken in the UK found that 77 percent of Britons considered the Oxford-AstraZeneca vaccine to be all right.