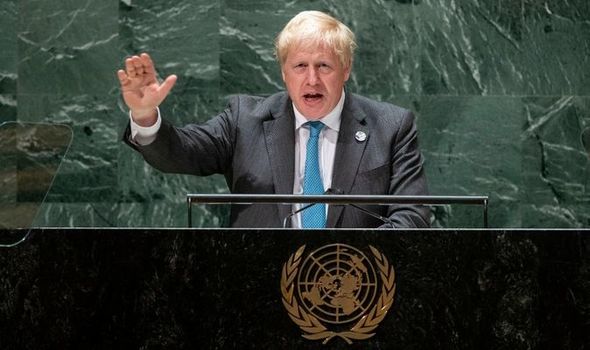 The Prime Minister will speak to fellow world leaders at around 2am (UK time).

Mr Johnson, 57, is set to use the speech in his home city to warn the world of the effects of climate change.

The climate issue has been on the top of the Prime Minister’s agenda during his trip to the United States.

Johnson will continue to champion his green-agenda when other world leaders meet in Glasgow for the COP26 in November.

During his visit to America, the Prime Minister has also discussed the limited progress being made in UK-US trade talks and has challenged Amazon founder Jeff Bezos on taxation.

2.50am update: ‘See you in Glasgow’ Boris ends speech to UN leaders

Boris Johnson finished his speech to world leaders at around 2:11am.

He rounded-off his fifteen-minute statement by claiming leaders need to “blow out the candles of a world on fire”.

Johnson said: “And so I invite you, this great UN assembly in November to come and take part, by your actions in what I hope will be a global coming of age and to blow out the candles of a world on fire.”

He then looked ahead to November’s meeting in Scotland’s largest city.

The Prime Minister concluded: “Thank you all very much.

“Thank you for the pledges that you’re making.

“I hope that you will increase them and do what is necessary.

“Mr President, see you in Glasgow.”

2.40am update: Boris claims Kermit the frog is ‘wrong’ as he pushes world to go Green

The Prime Minister has metaphorically challenged the Muppets character over the climate agenda.

The fictional frog had claimed ‘It’s not easy being Green’.

But Mr Johnson told world leaders at the UN general assembly in New York that Kermit the frog was wrong.

“I want you to know that he was wrong,” he said.

The Prime Minister added: “It IS easy, it’s easy, it’s lucrative and it’s right to be green. Although he was unnecessarily rude to Ms Piggy I thought.

“But it is easy. ‘We have the technology,’ as they used to say when I was a kid. We can do it. So in 40 days time we have the choice before us.”

2.35am update: PM says COP26 in Glasgow will be ‘turning point for humanity’

Boris Johnson has used his speech at the UN general meeting in New York to promote the upcoming meeting of global leaders in Glasgow.

The Prime Minister explained how people had inflicted “irreversible” damage being inflicted on the “beautiful planet”.

Looking ahead to COP26 in November, Mr Johnson said: “And that is why the Glasgow COP26 summit is the turning point for humanity.”

He said: “I’m very pleased and encouraged by some of the pledges we’ve heard here at UNGA (UN General Assembly), including from Denmark and now a very substantial commitment from the US that brings us within touching distance of $100bn pledge that we need every year.

“But we must go further and we’ve got to be clear that government cash alone is not going to be enough.”

2.20am update: PM calls on world to ‘come together’ to fight climate change

The Prime Minister has called on the world to work together to combat climate change.

Speaking to his counterparts at the UN general assembly in New York, Boris Johnson said he wants the world to “come together in a collective coming of age”.

The Prime Minister went on to detail the need to restrict the global rise in temperatures to just 1.5 degrees.

He claimed: “The world – this precious blue sphere with its eggshell crust and wisp of an atmosphere – is not some indestructible toy, some bouncy plastic romper room against which we can hurl ourselves to our heart’s content.”

The Prime Minister has started to deliver his speech to other world leaders at the UN general assembly in New York.

Boris Johnson, 57, who arrived uncharacteristically early, began by warning the “gloomy scientists” have been proved right over COVID-19 and implored his counterparts to “come together” to tackle climate change.

Michael Gove swarmed by anti-vaxxers while popping out for coffee