Even the president labeled a speech boring recently, an admission that highlights a tendency toward delivering minutiae-filled discourse over scaling oratorical heights. 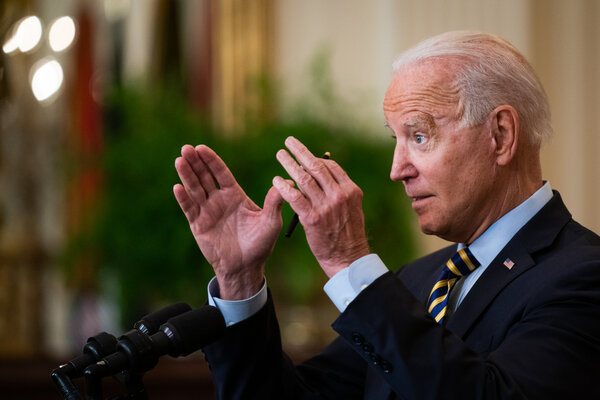 CRYSTAL LAKE, Ill. — Even President Biden thought he had been ponderous.

“I know that’s a boring speech,” the 46th president said at the end of 31 minutes and 19 seconds filled with statistics (2,374 Illinois bridges), academic studies (on-site child care increases productivity), global gross domestic product comparisons (China used to be No. 9, but is now No. 2) and predictions of 7.4 percent economic growth (though “the O.E.C.D. thinks it could be higher,” Mr. Biden noted, referring to the not exactly electrifying Organization for Economic Cooperation and Development.)

The president’s remarks on Wednesday, delivered to a friendly and respectful crowd of supporters at McHenry County College in this Chicago suburb, even included “reconciliation,” which Mr. Biden quickly admitted was a “fancy” Washington word.

As the president travels the country pitching his plan for spending trillions of dollars to reshape the American economy, he is facing a rhetorical reality that has long plagued many of his predecessors: There is a vast difference between explaining and inspiring, and Mr. Biden — who was recently called the “explainer in chief” by his press secretary — often struggles to reach the potential oratorical heights of the office he holds.

Mr. Biden’s ambitions are vast and the substance of his presidency has been dramatic at times: an end to the nation’s longest war, a historic focus on equity and spending proposals bigger than anything before. He sometimes describes his agenda as a way to prove that the very concept of democracy itself can deliver for the people.

The White House is perfectly fine with Mr. Biden’s ability to turn down the political heat in Washington after four years of chaotic governance. But like former Presidents Barack Obama, who once delivered a 17-minute answer to a health care question, and Bill Clinton, who was forced to apologize to a late night comic for a dreadful convention speech, Mr. Biden can sometimes get lost in the minutiae.

To be sure, the details of governing are mind-numbingly tedious. But when the president starts a speech, what can seem like high-stakes drama to those inside the Washington Beltway often feels like the stuff of PBS documentaries to the rest of the country.

“There’s a loophole in the system called stepped up basis,” Mr. Biden explained in excruciating detail on Wednesday, laying out the case of a wealthy person who owes taxes on the sale of a stock. “If on the way to cash it in I get hit by a truck, God forbid, and died, it was left to my daughter, there would be no tax paid. It’s not inheritance tax. It was a tax due 10 seconds earlier!”