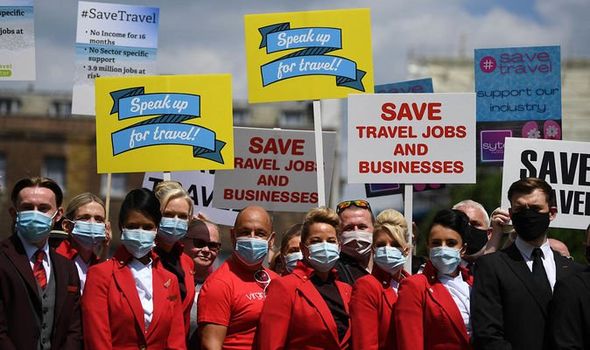 The change could be announced today, but government sources warned work was continuing and no final decisions had been made. Such freedom would dramatically improve the fortunes of the ailing travel industry, which held protests against the curbs across the country yesterday.

But, in a move that could threaten the UK’s plans to allow doublejabbed holidaymakers open foreign travel, Germany urged European nations to force British visitors to quarantine.

German chancellor Angela Merkel said yesterday: “In our country, if you come from Great Britain you have to go into quarantine – and that’s not the case in every European country…and that’s what I would like to see.”

Current curbs ban anyone entering from Britain unless they are a German citizen, a resident or their spouse or child, or if there is an “urgent humanitarian reason” such as a family bereavement.

People from Britain must register for permission to visit, then isolate for 14 days.

Frau Merkel’s quarantine call comes as concern grows in Europe over the spread of the Covid delta variant, first seen in India and now dominant in Britain.

Italy has imposed a five-day quarantine on British travellers and the US has banned UK tourists as it battles a surge in delta cases.

Malta, which attracts around half a million visits from British tourists every year, has weekly coronavirus rate of just 1.6 cases per 100,000 residents, compared with 108.4 in the UK.

Travellers who visit the island have to show a negative PCR test taken up to 72 hours before their arrival. The Covid case rate for the whole of Spain is 48.3 per 100,000.

Mr Shapps said yesterday: “I’m optimistic that the world is catching up with where we are in our vaccination programme.

“What happens in the UK is, people say, ‘Well, everyone I know or a lot of people I know are vaccinated’.

“But of course, as soon as you go abroad you find that’s actually not the case. So balancing the opening up whilst preserving people’s safety and security at home is absolutely at the forefront. We’ve got to follow the data and that’s what we’ll be doing in the meetings over the next few days.” 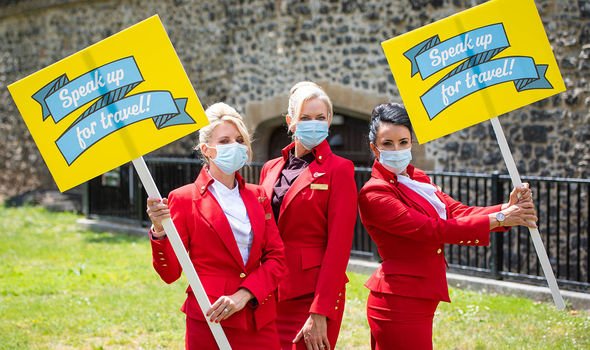 Mr Shapps defended the Government’s decision to prioritise the health of British people.

He also insisted “we’ve not been slow at coming forward for support” and said £7billion had been given to the aviation sector during the pandemic. Any changes to Britain’s safe travel green list, however, are expected to be limited.

Only 11 destinations are on the list, but none is a major tourist hub open for travel.

Ministers are working on plans to allow double-jabbed holidaymakers to travel to amber list countries without having to isolate on return.

Warning the UK risked being left behind, the Cobra Beer founder said world travel was “essential for trade and business, not just tourism, and a key component in any economic recovery”.

Kuoni boss Derek Jones said the outbound travel sector had been “decimated by this pandemic and by the Government’s haphazard response to it”.

He said: “We are united in one message today: we want to see the safe reopening of international travel alongside targeted financial support for businesses which have not been able to trade for well over a year.”

Julia Lo Bue-Said, the chief executive of Advantage Travel Partnership, said: “A complete lack of government support means that many businesses are now fighting to keep the lights on.

“We are asking for the safe return of international travel through an effective, risk-managed process by properly implementing the Global Travel Taskforce’s plan for a traffic-light system.”

Virginia Messina of the World Travel and Tourism Council, warned the sector was “teetering on the brink of collapse”.

Industry body Abta estimates 195,000 travel jobs have been lost during the pandemic or are at risk.

Chief executive Mark Tanzer, said “time is running out” for many travel agents and tour operators which “feel totally abandoned”. He added: “We can’t go on like this.”

The Travel Network group represents over 1,200 independent travel businesses across the UK and like colleagues across the travel industry we have seen our members’ revenues drop to a fraction of 2019 levels over the last 14 months, and a number of our members have sadly closed their doors for good.

While much of the economy reopens, businesses in the outbound travel sector have been left out in the cold with a lack of financial support from the government and ambiguity about a safe route to international travel.

Our industry employs over 221,000 people and contributes £37.1billion to the economy but our calls for sector-specific financial support and clarity on the roadmap towards free international travel have not been met by the Government.

Today, on the Travel Industry Day of Action, alongside colleagues across the travel sector we’re asking the Government to allow international travel to return safely in a risk-managed way, implementing the Global Travel Taskforce’s plan for a traffic-light system. This should see the Green list expanding in line with the evidence and making restrictions more proportionate, whilst keeping a strong red list to guard against variants.

Until a time when people can travel freely and safely again, we are also asking for a package of tailored financial support, including extension of the furlough scheme, recognising that the outbound travel sector’s ability to trade and generate income is much slower than first anticipated and more gradual than for businesses in the domestic economy.

The travel industry was the first into this crisis and will likely to be one of the last out of it. Time is running out for many UK travel businesses and we hope that the Government will listen to our demands and respect the contribution we make to the UK economy.