Three years ago, in the hills outside Kabul, I watched the latest recruits go through their paces at the start of a 40-week officer training course.

This was supposed to be Britain’s legacy in Afghanistan; a generational commitment to train and mentor the commanders of the future, the military leaders who would oversee and ensure the country’s security when NATO forces were long gone and Afghanistan once again belonged to Afghans.

“Sandhurst-in-the-Sand” was modelled on the prestigious Royal Military Academy in Berkshire; it was a gift to Afghanistan that came with a promise: the British trainers would remain for decades to see it through. 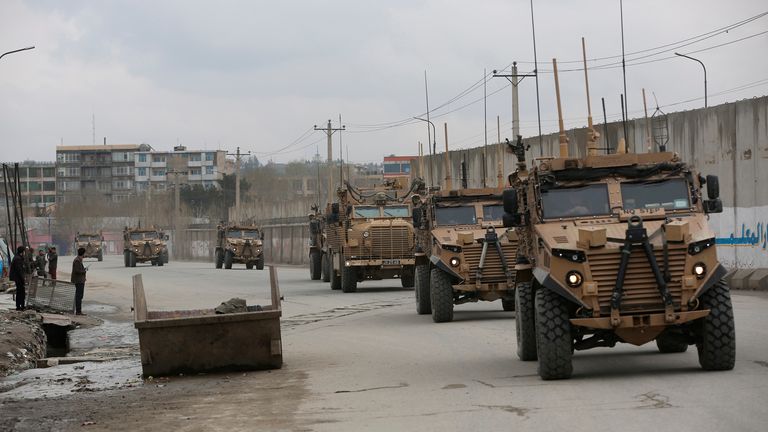 Only once the head of then Afghan Armed Forces was British trained, would they be able to leave, job done. That was what we were all told, at least.

That investment is unravelling by the day, perhaps faster than anyone could have predicted. Faced with a Taliban assault on multiple fronts, Afghan forces are struggling.

The speed at which the Taliban is retaking ground – six provincial capitals in just four days – is deeply worrying.

With minimal air support, (the Pentagon won’t say how many airstrikes have been carried out in recent days, but it isn’t many), Afghan forces are left to strategise, plan, deploy and fight almost entirely alone, something they’ve never done before, and something they clearly weren’t yet ready for.

The deployment of the United States envoy on Afghanistan, Zalmay Khalilzad, to plead with the Taliban in Doha, at least shows that the White House is concerned by the unravelling situation on the ground, but I think it will make little difference.

Rather than temporarily surging forces to beat down the Taliban before negotiating a peace deal from a position of strength, the US announced its withdrawal date and then promptly left.

The Trump deal was “a rotten one”, Britain’s Defence Secretary Ben Wallace candidly declared in an interview this week.

Having successfully captured so much ground, and in such short time, what incentive is there for the Taliban to now negotiate?

Continue the offensive at this rate, and no-one would realistically rule out the group taking Kabul.

As unthinkable as that might have been only a few weeks ago, and after so many years of coalition bloodshed, it must now be considered seriously in Washington, London and at NATO headquarters in Brussels.

The Taliban doesn’t want to head a liberal democracy. It’s strict and unforgiving view of rule doesn’t allow for compromise or freedom – the targeting of Afghan journalists in recent days is a demonstration of that.

The Taliban falsely claimed they’d entered the key city of Mazar-i-Sharif over the weekend, but the climate of fear had already been sowed.

They are over-running regional news outlets and broadcasting their own “Voice of Sharia” radio. In recent years, Russia has been accused of helping the Taliban broadcast anti-NATO messages to influence local populations.

Winning the media narrative is so important in war – distorting opinion can be every bit as powerful as the bullet.

Having withdrawn so decisively, the US has made it clear it is now Afghanistan’s struggle, not Washington’s.

Ben Wallace also revealed that other NATO members were unwilling to stay in Afghanistan once the Americans had left.

With that backdrop, as much as the US might push for a diplomatic solution, I cannot see it happening myself – the Taliban now has too much to lose.