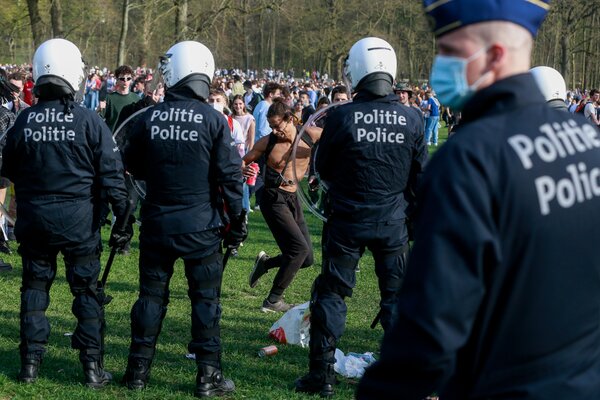 BRUSSELS — In an April Fool’s Day joke that went wrong, a fake announcement of a music festival contributed to thousands gathering in a major park in Brussels on Thursday in defiance of Covid-19 restrictions. As the police confronted the crowd, several officers and participants were wounded, and four people were arrested.

The unusually warm weather in the city would most likely have drawn people to the park in higher numbers, but the prank added to the density. The level of frustration, particularly among younger people, is high in Belgium, as new Covid-19 cases are increasing and hospitals become saturated despite months of restrictions.

The hoax festival, announced on Facebook and called “La Boum,” a slang word in French for a party, promised the appearance of famous DJs, including David Guetta, and claimed that no coronavirus rules would be followed.

The organizers noted that the festival was a hoax, but, according to the police, 1,500 to 2,000 people still gathered in the park, Bois de la Cambre, on Thursday afternoon, after tens of thousands registered on Facebook their interest in the event. Despite several warnings, the police said, the attendees refused to leave, and some chanted “Freedom!” and threw bottles. The police used water cannons and sent in mounted officers to disperse the crowd.

Belgium has been in a semi-lockdown since October, with restaurants and bars closed, and rules requiring residents to work from home and limiting social contacts to one person per household. Up to four people are allowed to meet outside, as long as they wear face masks and respect social-distancing rules. Last week, in response to an increasing number of new cases and a rise in the number of hospitalized patients, the Belgian authorities tightened the rules, ordering hairdressers and beauty salons to close and allowing nonessential stores to serve customers by appointment only.

Prime Minister Alexander De Croo posted on Twitter that the gathering in Brussels was “totally unacceptable.”

“All support to the injured police officers,” he added. “I understand everyone is tired of corona. But the rules are there for a reason, and they are binding for everyone. Hospitals are filling up. Solidarity now is the key to freedom tomorrow.”

Annelies Verlinden, the Belgian interior minister, acknowledged that “for many people, especially the young ones, the Covid crisis is now lasting a very long time.” But she said that the gathering in Brussels was “a slap in the face for all those who are doing their best to respect the coronavirus measures.”

On Wednesday, a Brussels court ordered the Belgian government to lift all Covid-19 restrictions, ruling that the measures did not have a legal basis because they had been instituted by ministerial decrees. But the court gave the government 30 days to remedy the situation, and a special pandemic law is currently being debated in Parliament.