Pell, who once helped elect popes, is the highest-ranking Catholic Church official ever convicted of child sex crimes. 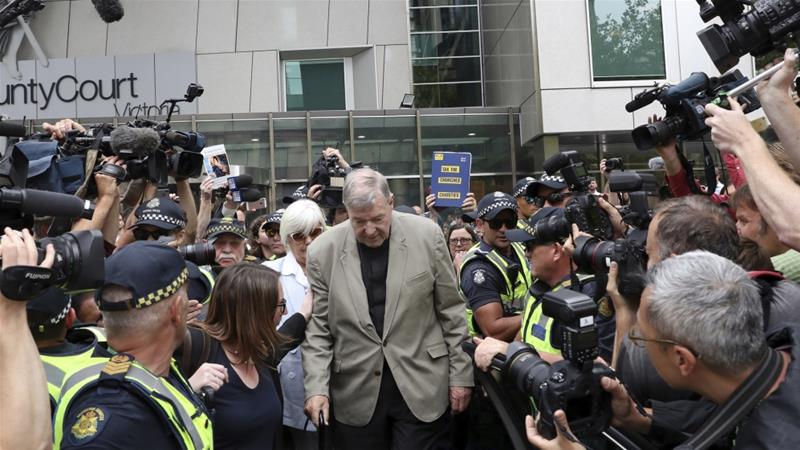 Australia’s High Court will deliver its ruling next week on whether to overturn the convictions of Cardinal George Pell, the most senior official in the Catholic Church ever to be convicted of child sex abuse.

The 78-year-old Pell is one year into a six-year sentence for molesting two 13-year-old choirboys in Melbourne’s St Patrick’s Cathedral while he was the city’s archbishop in the late 1990s.

The High Court said on Thursday its seven judges will give their verdict at 10am (00:00 GMT) on Tuesday in the east coast city of Brisbane.

Judges heard Pell’s appeal on March 11-12 before hearings were cancelled due to the coronavirus risk. They could yet deny his appeal, order a retrial or quash the conviction altogether.

The former Vatican treasurer maintains his innocence and the court’s decision could be his last chance to clear his name.

A Victoria state County Court jury convicted Pell on all charges in December 2018. The Victoria Court of Appeal in August last year rejected his appeal against the jury verdicts in a 2-1 majority decision.

The case relied largely on the testimony of Pell’s surviving victim.

Now in his 30s with a young family, the man first went to police in 2015 after the second victim died of a heroin overdose at the age of 31. Neither can be identified under state law.

Two of the judges found the man’s account “very compelling”, saying he was someone who “was clearly not a liar, was not a fantasist and was a witness of truth”.

The third judge, however, found the man’s account “contained discrepancies” and there was a “significant possibility” Pell did not commit the offences.

In court submissions, Pell’s legal team argued the majority judges applied an “erroneous judicial method” that required the cleric “to establish actual innocence as opposed to merely pointing to doubt”.

Pell’s lawyer Bret Walker told the court last month that a key factor that made Pell’s alleged offences implausible was that they took place after Sunday mass in a busy area of St Patrick’s Cathedral, not in secretive or private settings, “unlike so many appalling historical sexual misconduct cases”.

Walker told the High Court if it found the Victorian appeals court had made a mistake in upholding the convictions, Pell should be acquitted.

In response, the prosecution called the grounds for appeal “problematic”, saying the argument “glosses over evidence” that supports the victim’s account.

Prosecutor Kerri Judd told the seven judges that if there were a mistake, they should send the case back to the appeals court to hear it again.

Otherwise, the High Court should hear more evidence and decide itself whether the convictions should stand, Judd said.