BBC Weather’s Carol Kirkwood warned the area of low pressure could produce winds of up to 70mph in some areas of the UK. Heavy showers are expected to hit most of the UK with the potential for thunder. The Met Office has issued a yellow weather warning for wind on Tuesday and Wednesday.

Ms Kirkwood said: “If I draw your attention to this great big lump of cloud out in the Atlantic. Well that is a deepening area of low pressure that is once again going to bring us some wet and very windy weather tonight and tomorrow.

“But today you can see the rain scooting across the south.

“We’ve also got some showers across eastern parts of Scotland, northeast England and Northern Ireland. Some of those could be thundery but a lot of dry weather and highs between 12C and 21C.

“It’s a cold start in northern Scotland with temperatures hovering around freezing. 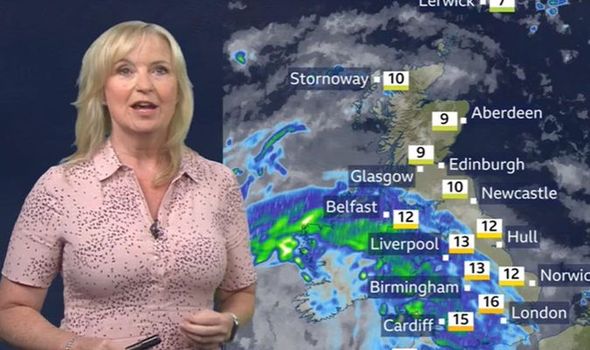 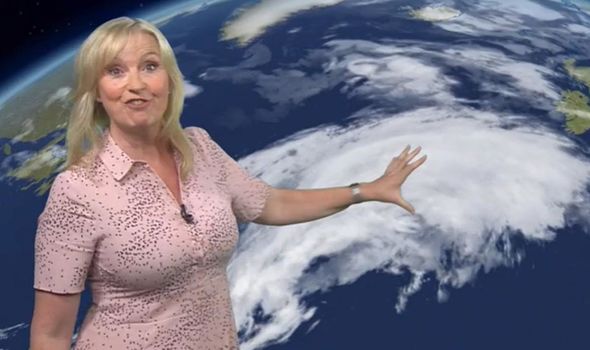 “As we move on to the evening and overnight you see we lose a lot of the showers initially then in comes this rain, heavy at times, pushing steadily northeastwards and with it we’re going to see the wind strength increase.

“We could have gusts of 40-45mph plus. Once again we’re in the realms of what we had last week.

“As we go through the course of tomorrow, more wet and windy weather to come our way, it’s courtesy of this area of low pressure.”

She warned that wind gusts of up to 70mph on Tuesday will wrap around the UK bringing wet weather for all.

A holidaymaker has died after getting into difficulty in the sea off the Cornish coast as emergency services warn of the dangers of strong winds which are battering parts of the UK.

The Met Office issued a yellow weather warning of wind for all of England, Wales and parts of Scotland on Tuesday, bringing the potential for travel disruption and large waves in coastal areas.

Devon and Cornwall Police said a man, who was in his 50s and from the London area, was pulled from the water near Helston on Thursday afternoon but was confirmed dead shortly afterwards.

A teenage boy, who is related to the man, is in a stable condition in hospital in Truro following the incident at Church Cove in Gunwalloe, the force added. 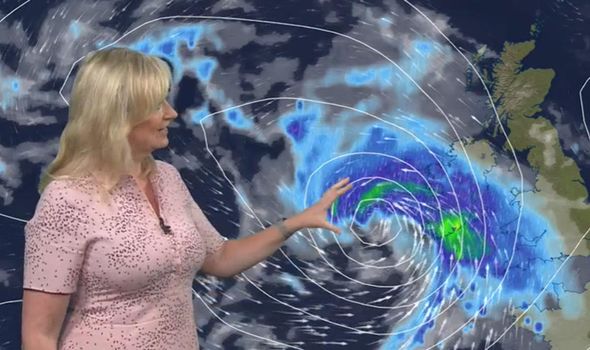 Stormy conditions bring a risk of coastal surges and flooding in communities close to the sea, Devon and Cornwall Police warned.

Waves up to 9ft (2.7m) high are being predicted and, together with strong winds, could create dangerous seas and strong rip currents.

Some 10 flood warnings were in place across parts of the UK on Friday afternoon – meaning flooding is expected – while the Environment Agency issued a further 35 flood alerts for swathes of the south-west.

High winds were causing “treacherous driving conditions”, according to the AA, which advised drivers to be alert for tree branches on the roads.