BBC Weather presenter Carol Kirkwood said it has provisionally been the frostiest April in 60 years where “somewhere in the UK has had a night frost every single day this month so far”. Temperatures will plummet this week as an Arctic weather front slams the top of Scotland and will push southwards. Low pressure will pull away the warm air leaving scattered showers, rain and colder temperatures not exceeding 14 on Wednesday. Wednesday will be much cooler than previous days but as Thursday arrives, parts of the country will brighten up but remain cold.

The weather presenter said: “Today we’re are looking at scattered showers some of them merging to give longer spells of rain”

“And also still got that chilly wind.”

“Low pressure is driving our weather, it’s providing a lot of showers and some rain as well.”

She explained how a village in the Vale of Glamorgan in Wales has had nearly an inch of rain this morning. 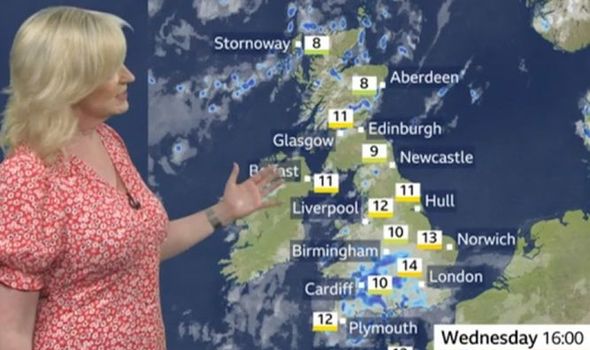 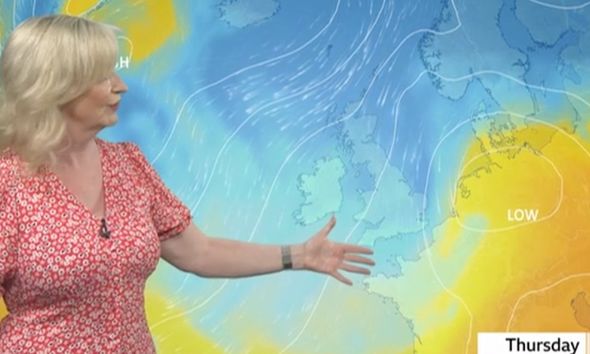 Kirkwood continued: “It’ll brighten up across Northern England and Southern Scotland through the afternoon with a few showers, and we’ll see further showers across Northern Ireland.

“Temperatures today will feel cool along the North Sea coastline with a North-Easterly breeze.“

Going into Wednesday afternoon it will be 14 degrees in London, 10 in Cardiff, 11 in Newcastle, and 12 in Aberdeen.

Bit Kirkwood stressed “temperatures are starting to slip” this week as a cold block of air travels southwards from the Arctic chilling Brits after a warm spell sent temperatures rocketing to 18 in some areas of the U.K. on Tuesday.

JUST IN: Brexit LIVE: Voting underway as MEPs deciding whether to approve deal 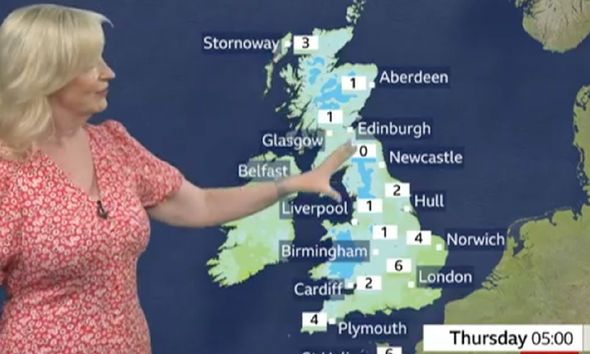 From Wednesday into Thursday overnight “low pressure pulls away” which she said will “open the gates to cooler air” as that Arctic block of weather pushes through.

The weather presenter added: “As we head through the night we’ve got that widespread frost.

“And temperatures will hold up to 4 or indeed 6 degrees.”

Temperatures on Thursday will continue to fall as the Arctic winds cool Britons. 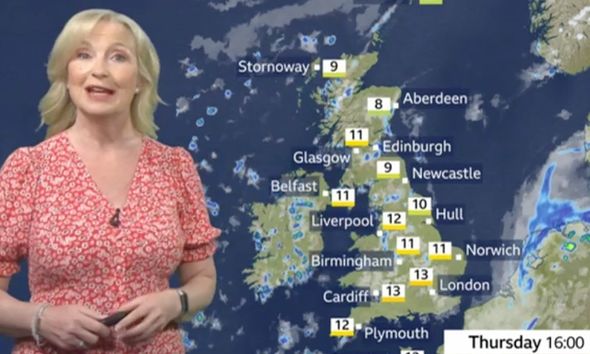 But she said Thursday will be a brighter day than Wednesday but much cooler.

It will be 13 degrees in London, 12 in Plymouth, 12 in Liverpool, 9 In Newcastle and 11 in Glasgow on Thursday afternoon.

Kirkwood added: “As we head through Friday and into Saturday we hang onto a lot of dry weather, there will be some showers around, the wind won’t be as strong.

She added how “temperatures will be lower, we are looking to at 9 to about 13 degrees” across the U.K. on Saturday while more showers are expected during the course of the day.