BBC Weather forecaster Carol Kirkwood warned temperatures may reach up to a whopping 18C on Tuesday. But the unusually warm weather will only last for just over 24 hours as a new cold weather front will batter the UK on Wednesday with plunging temperatures and snow showers. Ms Kirkwood said: “We have a lot of cloud around today. A mild start, and mild day and also fairly blustery. You can see that by looking at the isobars. Reigning steadily across western Scotland, more rain to come as we go through the day.

“The rainfall totals here are starting to mount up.

“The rain also affecting parts of Northern Ireland and with all this cloud around and a south-westerly wind you will find, in western areas, there is quite a lot of murk.

“Some mist and fog on the coasts and hills. Further east in the shelter of the Grampians, because the shelter of the Pennines in the east, north-east Wales, here we are likely to see the clouds break up and some sunshine come through.

“If that happens we can see temperatures getting up as high as 17C or 18C. 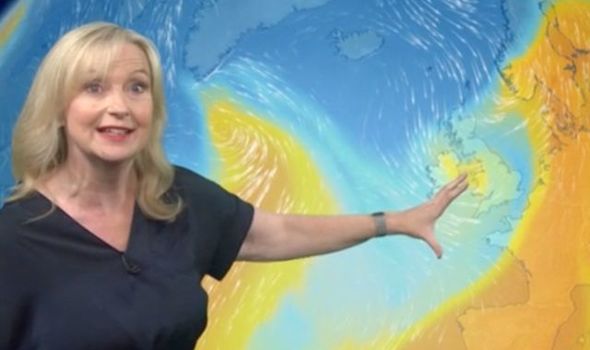 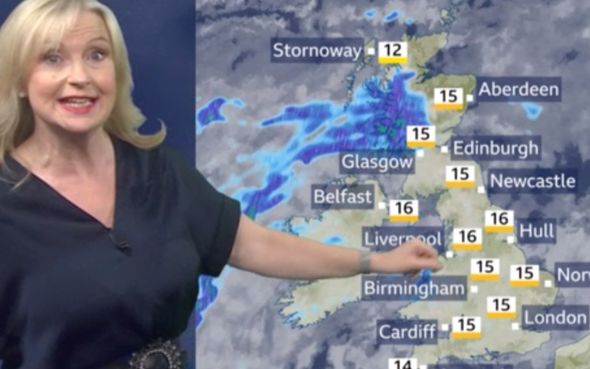 But the BBC forecaster warned the warm temperatures will soon be swept away by a new cold front barrelling towards the UK overnight and bringing snow.

She said: “Through the evening and overnight, we still have a lot of rain across western Scotland.

“Again, the rainfall totals really mounting up. The rain becomes ensconced across the Northern Isles. Rain across Northern Ireland, getting into Wales and the south-west and still quite murky because we still are in that south-westerly airstream.

“Temperatures overnight, they would be good by day at this time of the year.

“Then as we head into Wednesday, well, this weather front will signal a bit of a change because as it sinks in the south taking rain with it, colder air follows on behind.

“We start with a fair bit of cloud, even some brightness in some eastern areas, then in comes the rain from the west to the east.

“Still a lot of rain across the northern isles and then behind this weather front we see clear skies and a fair few showers. But temperatures will start to dip a touch.

“Overnight Wednesday into Thursday, remember the cold air is feeding in? This is when we are likely to see some snow.” 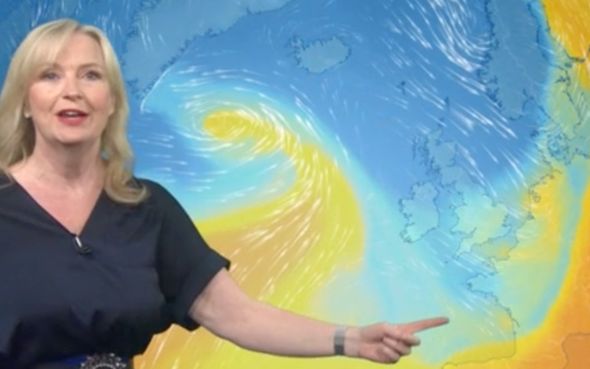 WXCharts’ snow probability models show a 20 to 50 percent chance of snow between a five day period of Thursday, November 19 to Monday, November 23.

The charts turn blue in northern regions of the UK, including central Scotland and as far south as Northumberland and Cumbria.

Temperatures are also expected to drop to freezing lows of 0C in central and western Scotland at the end of this week.

The north-east is likely to face a chilly 3C and further south in London, there may be lows of 4C.