Belarus President Alexander Lukashenko has accused Russia of lying about a “mercenary” group arrested in Belarus last week and says another such group has infiltrated his country.

“Today we heard of another unit sent into the south,” he said in an address to the nation. “We’ll catch them all.”

Russia has denied that the 33 Russians held were plotting terrorism and were linked to anti-Lukashenko activists.

Anti-Lukashenko protests have grown, as he seeks re-election on 9 August.

Russia has said the 33 – claimed to be members of the shadowy Wagner mercenary group – were only transiting via Belarus en route to Istanbul. And Russia insists they had no mission to interfere in the Belarus presidential election.

“All this about Istanbul, Venezuela, Africa and Libya – it’s a lie. These people – they have already given testimony – were sent into Belarus on purpose. The order was to wait,” Mr Lukashenko said, in his televised annual address.

He said the Russians could have flown directly to an overseas destination – there was no need for them to enter Belarus to do so.

“So far there is no open warfare, no shooting, the trigger has not yet been pulled, but an attempt to organise a massacre in the centre of Minsk is already obvious,” he alleged.

Russia has urged Belarus to release the men, who have been named by Belarusian officials, though the Wagner connection has not been independently confirmed.

The Wagner group is reported to have played a significant role in eastern Ukraine, helping the pro-Russian rebels there, as well as in Syria, Libya and some other conflict zones. 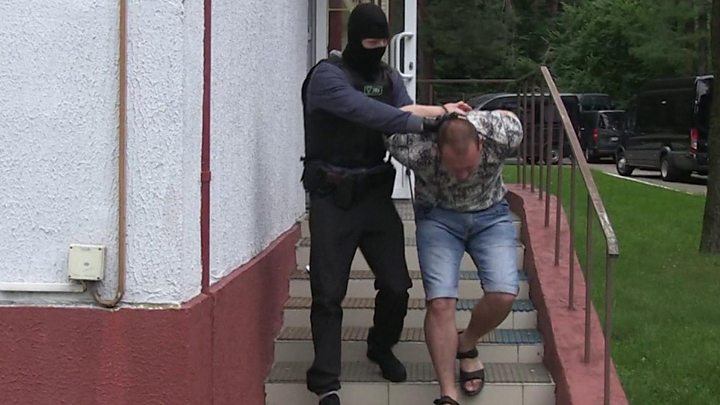 The Belarusian authorities have been cracking down on opposition figures and peaceful protests in the run-up to Sunday’s poll.

The main rival of Mr Lukashenko is now political novice Svetlana Tikhanovskaya, who stepped into the race after her husband Sergei Tikhanovsky, a popular YouTube blogger, was barred from standing and jailed.

The authorities allege that the arrested Russians were collaborating with Mr Tikhanovsky; his wife dismissed that “very scary” claim. Their five-year-old daughter and 10-year-old son have been taken abroad for their own safety.

Mr Lukashenko, in power since 1994, has been criticised over his handling of the economy and the coronavirus pandemic. He has urged Belarusians to carry on as normal, scorning the lockdowns imposed by the rest of Europe to curb the virus.