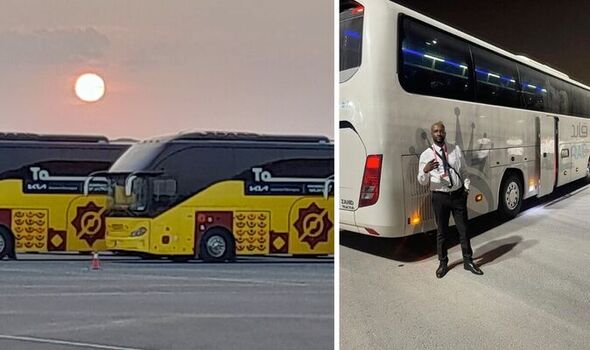 It was billed as the opportunity of a lifetime – a chance to earn good money while playing a small but significant role in the FIFA 2022 World Cup in Qatar. But last night British coach drivers employed to drive football teams around told how promises of “adventure” soon turned to a litany of broken pledges and chaos, leaving many out of pocket.

More than 40 drivers were successfully selected by DH Team, a Devon-based drivers’ agency which had won the bid to supply UK drivers for the six-week engagement.

The contract promised a £5,000 (€6,000) payday – to be split into three fortnightly parts – two-room apartments in Doha, a single-occupancy room in whichever five-star hotel their teams were staying, 12-hour shifts and a day off every week.

But almost half have already returned to Britain complaining of not being paid by Russian and Qatari organisers, not being fed, and receiving no water for 12 hours at a time despite the 35 degree heat. Others complained that they were treated as “slaves”, expected to be on call 24 hours a day, seven days a week with no free time or permission to explore the Gulf state.

Last night Adrian McLeod, who was assigned to the Belgian team, said: “I’m 44 and I can’t remember when I last cried tears before now. This has broken me.

“We had been promised the first payment of €2,000 after two weeks and three days. When that didn’t come into our bank accounts, we were given a choice – take £2,000 in cash, or wait another week and receive four weeks pay.

“I have a wife and children at home who needed this money and it would have cost me hundreds in fees to try to send it home myself. So I had no choice but to turn down the cash and wait. And wait and wait.”

When the next deadline came and went, there was still no money.

“I know of twenty of us who haven’t been paid what we are owed.” added Adrian, a driver with 28 years experience and an unblemished record

“Some of us were getting pretty desperate. We have wives and children at home who need this money and rent to pay,” he said.

“We tried everything we could think of. APD just dismissed us with promises that we would be getting paid soon. Always the same promises.”

But the nightmare didn’t begin there.

Instead of centrally-located two-bedroomed apartments, half the group was taken to a remote villa, twenty miles from the city.

“We finally got there at 11pm and were just abandoned. We’d been travelling for hours and there was nothing in the house; no water, no food, no crockery or cutlery – just bedrooms,” said Paul Cadman, 53, who was assigned to the Argentine national team. And, instead of the expected training such as learning routes, the drivers found themselves being taught the basic driving skills.

“This was for the benefit of a large group of Indian drivers who, we assume, had been roped in because they were cheap,” he said.

“There we were , all seasoned drivers with experience in driving abroad and there was the trainer teaching this second group what an indicator switch was.”

In the following week, promised coaches failed to arrive to take them to training – so the Brits devised a plan to train themselves.

“Like the rest of us, I was there to work. So when they stopped sending coaches for us, we decided to take matters into our own hands,” he said.

“Two of us would get a taxi to the depot, sign out two coaches, and drive them back to the villa. Then we’d get the drivers who needed the most practice to take them out onto public roads.

“We’d already used Google Maps to find the nearest shop where we could buy groceries -which was 30 minutes away on foot – so we decided to use it to locate the eight stadiums and get orientated.”

Having originally been assigned to the Canada team, Paul was thrilled when this was changed to Argentina.

“They were guaranteed to stay to the end and the thought of being with the likes of Lionel Messi was exciting, even to non-football fanatics like me.”

But this soon changed when he was placed in the team’s hotel at the University of Qatar’s campus, some way out of Doha.

Some drivers had already quit by this stage when they were informed that they’d be forced to share their hotel rooms with strangers.

“I took the cash and ran,” said another driver who didn’t want to be named,

“The last straw was when they told us we’d have to share our hotel rooms. That was another breach of contract. I have never had to share a hotel room in all my years driving, and I wasn’t going to start now – especially with someone I didn’t know.”

While Paul agreed to share, he soon found that his hotel was little more than a prison.

“On the day we picked the team up from the airport, we had been told to arrive at 3pm although their plane was landing at 3am the next morning. By the time we got to the hotel, we’d had nothing to eat to drink for more than 12 hours – a police officer had offered me a bottle of water when he realised -and there was nothing at the hotel. When breakfast came the next morning it was cold and, again, came without anything to drink.

“When I went to the foyer to speak to someone I was told by our APD agent that we weren’t allowed to be there. We were told we had to stay in our rooms, and that we would be on call 24/7 – another breach of our contract.

“When I asked whether we could go into the city to eat at a restaurant I was told we had to be back within the hour. It would-have taken 30 minutes just to get there.”

Paul, from Weymouth, added: “I’ve covered important events, from the 2012 Olympics to the G7 and Cop26, and I’ve never experienced anything like this. The organisers in Qatar simply don’t have a clue.”

Had the contract been signed with a UK firm, matters could have been taken to ACAA and then to an employment tribunal.

In an unexpected move, however, the contract they signed wasn’t with DH Team.

Citing “Qatari law” logistics coordinators Accord Pitch Doha (ADP) – one of 17 Russian companies tasked with delivering the World Cup – ensured that the contract was signed with MBM Transport, one of many enterprises owned by wealthy Mohammad Bin Misnad.

Last night Del Haggerty, managing director of DH Team, said: “There have been a series of unforeseen and unfortunate issues and, despite the fact that we are not legally responsible, I have not abandoned these drivers. I have been working very hard on their behalf and I’m sure they will, eventually, all be paid.”

Sources within the company were more scathing towards the Qatari organisers.

“I can tell you that management regret ever getting involved with this contract,” said one.

“We thought we’d be doing the training in Doha, that we’d be responsible for securing prompt payment, but it was only after we’d won the tender that we were told this wasn’t to be the case.