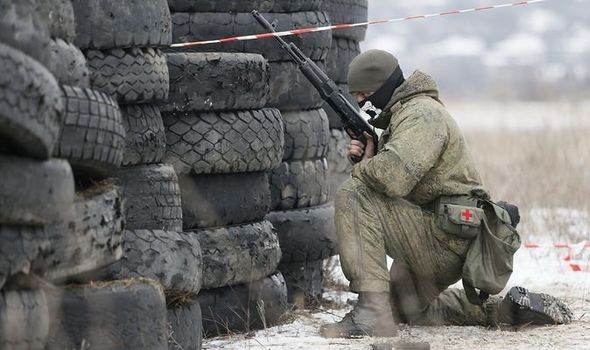 More than 100 are deployed in a training and advisory role with Polish, US and Canadian forces. The move to shape an exit strategy follows Defence Secretary Ben Wallace saying it is “highly unlikely” UK forces will fight Russian troops on Ukrainian soil.

Tensions continue to mount, with more than 100,000 Russian troops said to be near the border.

Satellite images from US firm Maxar Technologies have revealed a new brigade-level unit, consisting of hundreds of tanks and armoured vehicles, situated at an army base in Crimea.

Moscow has also published changes in regulations to allow military fatalities to be buried in theatre rather than be repatriated to Russia.

This is widely seen as an attempt to signal that plans for a military incursion are being made, though Russia denies this. And last night it announced it was pulling back 10,000 troops from close to the Ukrainian border in a surprise move ahead of talks with the US.

However, it represents a fraction of the number still believed to be stationed in the area.

Army chiefs are to mount a full “review” of Operation Orbital to ensure all UK personnel can be “safely withdrawn” if Moscow orders in troops.

Most of the British force is stationed at Yavoriv and these will drive to the Polish border a short distance away, sources say.

A small team of staff officers in the capital Kiev will also head for the border, while a maritime training cadre in Odessa is in the UK for Christmas.

The decision to evacuate will be made by Chief of Joint Operations Lt Gen Charlie Strickland.

His staff at Permanent Joint HQ in Northwood, Herts, will be on standby over Christmas to monitor “atmospherics”, and Lt Gen Strickland is understood to be receiving twice-daily updates.

“He will be looking carefully to gauge the effect of any incursion on the ability to get his troops out – he cannot allow them to be trapped there,” said an Army source last night.

British forces have provided short-term training to the Ukraine Army as part of an international package of support following aggression in 2014.

This created Russian-backed mini-states in eastern Ukraine, such as the Luhansk People’s Republic.

Since 2015 the UK force has given more than 21,000 Ukrainian personnel medical, planning, logistics and infantry training.

In 2019 the operation was extended to 2023, and broadened to include the Royal Navy and Royal Marines. They have been preparing Ukraine’s navy to face threats in the Sea of Azov.

Washington has provided more than £1.8billion in security assistance since 2015, and support from allies continues.

Mr Biden’s administration is focusing on a raft of sanctions such as barring Russia’s state-owned banks from using fund transfer system Swift and from holding foreign cash, though EU support is limited.

On Tuesday President Vladimir Putin warned that Russia had no room to retreat in the stand-off and would be forced into a tough response unless the West dropped its “aggressive line”.

He wants Nato to roll back to where it was in 1997, but that has been rejected by Baltic state members and Poland.

Foreign Secretary Liz Truss reaffirmed that the UK’s support for Ukraine remained “unwavering” and called on Russia to de-escalate.

Ms Truss said: “Any Russian incursion would be a massive strategic mistake and would be met with strength, including co-ordinated sanctions.”