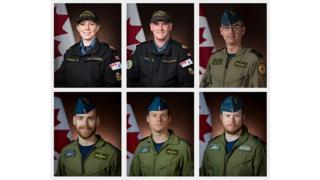 Five missing crew members of a Canadian navy helicopter that crashed off a Greek island during a Nato exercise are presumed dead, Canada’s military says.

The body of a sixth crew member, Sub-Lt Abbigail Cowbrough, has been recovered.

It is not yet clear why the Sikorsky CH-148 Cyclone crashed.

It took off from a Canadian frigate in the Ionian Sea on Wednesday and came down off the island of Kefalonia. A search-and-rescue mission in the area is now officially a recovery effort.

“All of them are heroes. Each of them will leave a void that cannot be filled,” he said.

Who was on board?

The body of Abbigail Cowbrough, a marine systems engineering officer originally from Toronto, Ontario, has been identified.

“There are no words. You made me forever proud. I will love you always, and miss you in every moment. You are the bright light in my life taken far too soon,” her father, Shane Cowbrough, wrote on Facebook.

The CAF says five other people were on board: