A quick weeknight sauté of ripe corn, tomatoes and seared halloumi is exactly what we love about summer. 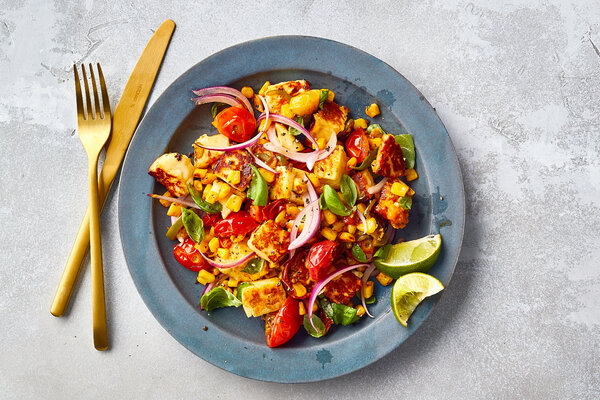 For me, peak summer is that joyful moment when the tomatoes and corn are ready at the same time, and there’s enough of each to go absolutely nuts.

Earlier in the season, I hold back. The first truly ripe tomatoes need nothing more than salt, some torn basil or mint, and a gloss of the best oil I have. Then I revel in every bite.

Early ears of corn get equally minimal treatment: a quick dip in boiling water followed by a slick of salty butter that drips onto my plate as I gnaw the kernels off the cob. (Pro tip: If there are boiled new potatoes on your plate to catch the butter, you won’t be sad.) It’s July eating at its most simple and best.

By August though, I’ve paid enough respect to the sanctity of those pristine ingredients. Now, I’m ready to liven things up.

This speedy corn and tomato sauté does just that. Liberally spiked with whatever aromatics I have around, it’s become an anchor of my summer weeknight cooking. Served by itself with some bread on the side, it makes a perfect light meal on any hot night. But it’s also supremely adaptable, and adding protein — chicken, shrimp, bacon and the like — bulks it up.

In this vegetarian version, I throw in halloumi, browning cubes in the pan until they turn irresistibly crisp on the outside before stirring in the tomatoes and corn. A sliced jalapeño and spoonful of cumin seeds gives a bit of spicy depth, while slivers of raw red onion lend sweetness and crunch.

First though, you’ll have to remove the kernels from the cob. I’ve tried just about every hack, from balancing the ears in the neck of a Bundt pan to lying them down and rotating while cutting.

But my favorite method is to break the cobs in half, stand them up with the flat side firmly planted on the cutting board, then slice off the kernels. The flat side lends stability; the short height keeps the kernels from flying around your kitchen.

Although to me the point of this dish is to take advantage of ripe seasonal produce, I have to admit that it’s almost as good in winter made with frozen corn and supermarket tomatoes. Which is good to remember come January, when we’ll all be grateful for a bit of peak summer in our lives.