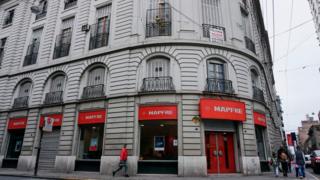 The birthplace of the 20th Century leftist revolutionary icon Ernesto “Che” Guevara has been put up for sale in the Argentine city of Rosario.

Current owner Francisco Farruggia said he had bought the 240 sq m (2,580 sq ft) apartment in a neo-classical style building in the city centre in 2002.

He said he had wanted to turn it into a cultural centre, but the plan never materialised.

The Argentine businessman did not say what asking price he would put on.

Over the years, the building between Urquiza and Entre Ríos streets has attracted a number of illustrious visitors.

But perhaps the most famous visitor was Alberto Granados, who travelled with Che Guevara when he was a young doctor by motorcycle through South America in the 1950s.

Che Guevara was born in a wealthy middle class family in 1928, but was later radicalised by the poverty and hunger he witnessed in South America.

He played a key role in the Cuban revolution in 1953-59, which overthrew dictator Fulgencio Batista.

Che Guevara then expressed his desire to spread revolution across South America and other developing nations.

From Cuba he travelled to Bolivia to lead forces rebelling against the government of President René Barrientos Ortuño.

With US assistance, the Bolivian army captured Che Guevara and his remaining fighters. He was executed on 9 October 1967 in the village of La Higuera, and his body was buried in a secret location.

In 1997, his remains were discovered, exhumed and returned to Cuba, where he was reburied.

The revolutionary still divides opinion as much today as he did in life.

His supporters see him as an example of commitment and self-sacrifice, his critics see a man they consider brutal and cruel.