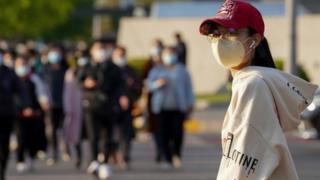 China has rejected calls for an independent international investigation into the origin of the coronavirus.

A top diplomat in the UK, Chen Wen told the BBC the demands were politically motivated and would divert China’s attention from fighting the pandemic.

Information about the origin of Covid-19 and how it initially spread could help countries tackle the disease.

The virus is thought to have emerged at a wildlife market in the city of Wuhan late last year.

Meanwhile an EU report accuses China of spreading disinformation about the crisis.

The bloc’s External Action Service says Russia, and to a lesser extent China, have “targeted conspiracy narratives” in the EU and neighbouring countries.

US President Donald Trump has also repeatedly attacked China for its handling of the outbreak, and the state of Missouri is suing the Chinese government, accusing it of doing little to stop the spread of the virus.

Scientists have poured cold water on speculation that the virus could have been engineered in a Wuhan laboratory.

What is China objecting to?

Almost from the start of the pandemic, there have been calls for international investigators to be allowed into China to find out how it all started.

On Thursday Australian Prime Minister Scott Morrison said that he would push for an investigation at the annual meeting next month of the World Health Assembly, the decision-making body of the World Health Organization (WHO). Australia sits on the executive board of the assembly.

The body already plans to discuss calls for a “lessons learned” review of health emergencies.

But Ms Chen told the BBC her country could not agree to any international investigation.

“The independent inquiry is politically motivated,” she said.

“We are fighting the virus at the moment, we are concentrating all our efforts on fighting against the virus. Why talk about an investigation into this? This will divert not only attention, it will divert resources.

“This is a politically motivated initiative, I think no-one can agree on this… It would serve nobody any good.”

Ms Chen said there were lots of rumours about the origins of the virus but such misinformation was dangerous, she claimed, and said it was like a political virus and as dangerous as coronavirus itself, if not even more so.

Governments in Europe have so far been wary of engaging in a diplomatic row with China at a sensitive time.

One UK official, who like others declined to speak on the record, said there was a “nervousness” about confronting China and that relations were “delicate”.

Countries are dependent on Beijing for deliveries of vital equipment in dealing with the crisis and want to keep the flow of information open to help understand what happened this time and prevent future outbreaks, and experts say the approach needs to be carefully calibrated.

“We need to dial down the rhetoric and the confrontation because we’ve got something more serious to deal with,” argues Charles Parton, a former UK diplomat in China and now a senior associate fellow at the RUSI think- tank.

In the US by contrast, the issue of China is becoming highly politicised in an election year with competing calls for a tough line on Beijing and pressure to investigate the origins of the virus.

What does the EU report say?

“Despite their potentially grave impact on public health, official and state-backed sources from various governments, including Russia and – to a lesser extent – China, have continued to widely target conspiracy narratives and disinformation both at public audiences in the EU and the wider neighbourhood,” the report says.

It claims Chinese officials and state media have been trying to deflect blame for the outbreak, curtailing any mentions of Wuhan as the origin of the virus, with some state-controlled social media channels continuing to spread the theory that the outbreak was linked to visiting US military representatives.

The authors also say there is “significant evidence of covert Chinese operations on social media”, citing reports of networks on Twitter with ties to the Chinese government.

The report also singles out Russia for spreading disinformation, saying pro-Kremlin sources and Russian state media were continuing to run a coordinated campaign with the aim of undermining the EU and its crisis response and sowing confusion about the origins and health implications of Coronavirus.