One of China’s richest men was held hostage by kidnappers with explosives as his son swam across a river to alert the police, local media reported.

He Xiangjian, the country’s sixth richest person and the world’s 41st, was held up at his mansion in a golf village in Foshan, Guangdong province, southern China, on Sunday afternoon.

The 77-year-old is the founder of Midea Group, one of the world’s largest home appliance manufacturers, and is worth an estimated £19.6bn, according to Forbes.

Mr He’s son, He Jianfeng, 55, who runs the company now, was reported to have crept out of the house and swum across a small river next to it to call the police, TMTPost said.

Police said they received a report at 5.30pm on Sunday about a break-in at a home at the Royal Orchid International Golf Villa, an upmarket development by Midea Group that has an 18-hole golf course and sports centre.

“The victim, surnamed He, was safe,” police said in a statement.

Detectives added that public security bureaus across the province all “paid high attention to the case after receiving the report, and quickly dispatched officers to rush to the site”, which has 24-hour surveillance and security guards.

Five suspects were arrested by 5am on Monday and nobody was hurt during the rescue operation, it added. 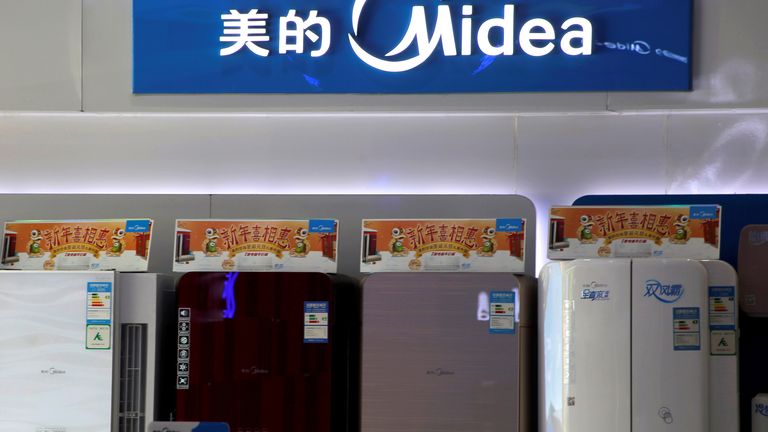 Midea Group confirmed the incident on Weibo, China’s version of Twitter, by linking to the police statement.

“Thanks to the public security, thanks to the media and all sectors of society for their concern,” the group added.

The river that Mr He’s son is believed to have swum over, which is about five metres wide, can be seen behind the house.

Several people living in the development said police locked down the whole community from Sunday afternoon to Monday morning.

Employees at Midea’s headquarters, about a kilometre away, were told to not go to work on Monday as risk assessments were carried out.

Mr He made his money after leaving school at a young age and working in factories, before getting a group of 23 local residents from the town where he still lives to get ¥5,000 (£560) together to produce plastic bottle caps in 1968.

After trying his hand at manufacturing various products, he started making electric fans, which were popular in the 1970s.

The company went global after it was allowed to export its air conditioners overseas in 1988 and it now makes all types of home appliances.

Mr He, who is quite a private man, retired in 2012 and handed his company over to his only son, who then acquired the world’s largest robot and appliances producer – the German firm KUKA.